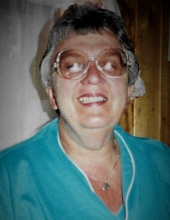 Mary Fults, at 90 years of age, peacefully passed away late in the evening of January 27th, 2022, in the comfort of her own home just as she wished.
Mary was born May 11th, 1931, to the late Leon and Rose Beldon. Mary’s brother Jack Beldon preceded her in death. Mary grew up in Fountain Square. She loved roller skating and watching movies at the theater where her brother was lead usher. Mary’s hobbies include quilting, basketmaking, and collecting clocks and loons.
Mary and Merritt “Pete” Fults were married and enjoyed a long life and marriage together. They had three children. They enjoyed traveling to Hawaii and Alaska but, enjoyed most of all their yearly family trips to Murphy’s Landing in Minnesota. They enjoyed bowling and spending time with their long-time friends Keith and Ruby May, who were there until Mary’s passing.
Mary was proud of her career of service to the children of Pike Township Schools as a cafeteria “lunch lady”. She was even able to serve her own grandsons through their time as students of Pike Township Schools.
Mary was preceded in death by her Husband, Merritt “Pete” Fults; Daughters, LuAnne Fortenberry & Deborah Fults; Grandson, David Fortenberry; and her beloved companion Kodi, the German Shepard. She is survived by her Son, Thomas Fults Sr.; her Grandsons, Thomas Fults Jr. (Jamie Fults) & Timmy Fults (Michelle Fults); and her Great-Grandchildren, Trajan (Timmy & Michelle) Max, Issac, Skylar, and Ryanne (Thomas Jr. & Jamie), and Danny (David).
Upon the death of her husband “Pete” she was cared for by her Daughter Deborah until Deborah’s untimely passing. Her Son Thomas then stepped up and moved in with her to make sure she was cared for her until her passing. They both devoted so much time, love, and care for their beloved Mother that it is to be admired in times like these. Much needed care was also given to Mary by her dear companion Nancy Fults.
Mary enjoyed watching her programs on television and watching the birds that gathered outside her window. She loved to cheer on the Indianapolis Colts and Purdue. She enjoyed conversation and card games with her dear friend John Mannion. She had loyal grandsons, Thomas Jr. and Timmy, that were always there to do whatever Mary or Pete couldn’t around their home. She loved visits from her Great Grandchildren to hear all about their sports and school experiences, she was so proud of them. She enjoyed visits from her Grand Daughter in law, Michelle Fults, who came to tidy up the house but, really just came to chat and spend time with her. She loved her German Shepard Kodi, they were inseparable and Kodi was the most spoiled German Shepard ever.
Mary was a devoted Wife, Mother, Grandmother, and Great Grandmother. Her laugh and smile could light up the room. She will be so very missed by all who were lucky enough to have known her. Her memory will live on in the hearts of so many.

Due to inclement weather, Funeral Services have been changed to Tuesday, February 8, 2022 at Indiana Funeral Care at 12:00 P.M. Visitation will be from 10 A.M. until the time of service. The committal service will follow at the Lincoln Memory Gardens, 6809 S. Indianapolis Road, Whitestown, IN 46075.
To order memorial trees or send flowers to the family in memory of Mary Fults, please visit our flower store.