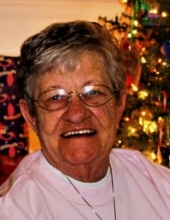 Marie “Charlene” Browning, 81, of Noblesville, IN passed away Tuesday, November 30, 2021 at 5:08 p.m. in Riverview Hospital, following complications with pneumonia. She was surrounded by family.

Charlene was born January 26, 1940 in Saint-Leonard, New Brunswick, Canada to Geraldine Akerley, now deceased. She was baptized and confirmed Catholic in 1949. She was raised by her aunt and uncle, Patricia and Donald Akerley (New Brunswick, Canada), who also preceded her in death.

She married and immigrated to the United States in 1961, where she lived in Cicero, IN. until her divorce. She worked at Carter Lumber for sixteen years, before leaving to pursue other interests.

Charlene loved country music, Bingo and playing cards. She was involved in community bowling and was an integral part of the Stardust Bowling Alley family until it changed its name and location. She continued to bowl and in 2012, Charlene was inducted into the USBC Hall of Fame of Greater Hamilton County. She and her teammates won a multitude of trophies and accolades through the years. Charlene was an avid sports fan, but especially loved her Colts and Pacers.

First and foremost, Charlene loved her family. She was preceded in death by her son, Michael “Smog” Akerley (New Brunswick, Canada) in 2020. Charlene is survived by her daughter-in-law, Cheryl Lahey (New Brunswick, Canada), a grandson, Travis Michael Akerley (Ontario, Canada), a niece, Rikki (Browning) Sigler (Westfield, IN) and a great- niece, Emsley Hope Sigler (Westfield, IN). She was known as Nanene and Nene to her family and until her passing, drove every day to help take care of “her babies” at a daycare. She will be deeply missed by all.

No public memorial service will be held in preference to Charlene’s final wishes. Online condolences may be offered to the family at www.IndianaFuneralCare.com
To order memorial trees or send flowers to the family in memory of Marie Charlene Browning, please visit our flower store.