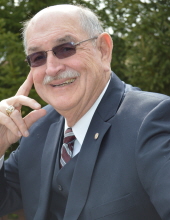 Mack “Pa” L. Hunter Jr, 89, of Indianapolis, Indiana passed away on March 23, 2022. Born on August 19, 1932, in Hopkinsville, KY to the late Corinne (Minton) and Mack Lee Hunter Sr. He is preceded in death by Michael Lee Hunter (son), Hoda Khaled Ibrahim (granddaughter), Mary Elizabeth (Hunter) Daniel (sister), and James Robert Hunter (brother).  Mack is survived by his loving wife of 40 years Emily (Lee) Hunter and sister Anna Beatrice (Hunter) Kirby; children: Treva (Morrison) Patterson, John Raymond Morrison, Stephanie (Hunter) Haskett (spouse: Mike Haskett), Jody (Morrison) Roy, Deborah (Morrison, Ibrahim) Nichols (spouse: David Nichols); grandchildren: Chelsy (Patterson) Winters (spouse: Mark Winters), Ali (Patterson) Herman (spouse: Taylor Herman), Noelle Ibrahim, Ethan Roy, Evan Roy, and great-grandchildren: Knox and Rory Winters.  Mack attended Barrett Manual Training High School in Henderson, KY where he excelled in football, basketball, and track (and made sure to let everyone know he excelled as a high jumper). Mack then went on to Murray State Teachers College where he studied history and played basketball (and would tell everyone he played against UK and a future Mr. Basketball). Mack spent much of his career in the finance business including many years at GE Credit. Mack was a 60-year member of the Kentucky Masonic Lodge and a 50+ year member of the Millersville Lodge in Indianapolis.  Mack was an avid reader who filled every shelf of every room in the house with books, loved golf, and was very proud that he was left-handed. The love of his life was his family and is remembered as saying that he wished we all could have lived in a commune together. For decades, the family had dinner at Ma and Pa’s house on Sunday afternoons and played whiffle ball in the front yard, where he always appeared happiest. Pa’s second love was his sweets, especially Lemon Meringue Pie, Maple Nut Goodies, and Moon Pies. He enjoyed sharing his Old Overholt Rye and smoking a good cigar.   Mack spent endless hours with his dear friend Hank Schull playing chess, going to the card club at the Lodge, smoking cigars, breakfasts out, going to the gym, and the casino. Mack loved traveling and in 2017, he and Hank took what he considered the trip of a lifetime to Scotland.

Mack’s wife, family, and friends will dearly miss him and his seemingly endless silly jokes.

The family requests those who wish to express sympathy to consider donating to the Alzheimer’s Association or your favorite charity in lieu of flowers.

To order memorial trees or send flowers to the family in memory of Mack "Pa" L. Hunter Jr, please visit our flower store.