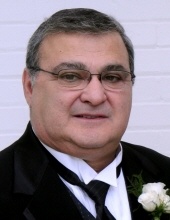 Louis “Louie” Spataro
August 12, 1941 ― February 6, 2022
Louis “Louie” Spataro of Fishers, Indiana, a U.S. Army veteran of the Vietnam War and proud husband, father, grandfather and great-grandfather, died Sunday, February 6, 2022. He lived a full, vibrant and memorable life for 80 years.
Louie was born on August 12, 1941, in Hammond, Indiana, to Sicilian immigrants Angelo and Angeline (Caccitore) Spataro. A graduate of George Rogers Clark High School, he joined the Army as a young man and served in a radio communications unit during the war, earning a National Defense Service Medal, Vietnam Service Medal, Vietnam Campaign Medal, and an overseas service bar. His service to America was among his most cherished accomplishments.
Upon returning home from the war, he worked as a machinist and eventually opened The Pallet bar and restaurant in Calumet City with a buddy. The role suited him: Louie was the ultimate people person who relished spinning stories as he poured beers and cocktails.
During that time he met Diane Mikolajczak, who would become his one great love. The two married on July 14, 1973. Louie not only gained a wife, but a family, welcoming Diane’s three children ― Linda, Lisa and Mike ― into his life. Together they had a son, Tony.
With his bachelor days behind him, Louie sold his bar, and the family moved to Rensselaer, Indiana. Within a few years ― in 1982 ― cancer took Diane from the family. He never stopped loving her.
In Rensselaer Louie went back to his roots as a machinist for a time before a small restaurant in the center of town went up for sale. Louie bought it and opened Spataro’s Café, where he served Indiana home cooking, including his homemade pies and famous lasagna. But the restaurant was more than a place to eat; it was a gathering place. Memorably, a sign hung from the ceiling over a large table that read, “This table… reserved for farmers, fishermen, golfers and other liars.” He befriended them all.
For his next professional chapter, Louie took a role with the Rensselaer streets and sanitation department. He became superintendent and launched the city’s first curbside recycling program, long before some of the state’s biggest cities had taken that step. He retired from the position in 2002 and later moved to the Indianapolis area, ultimately settling in Fishers.
Throughout his life, Louie remained committed to country and community. He was an active member of the Veterans of Foreign Wars and American Legion, participated in the Fishers Police Department Citizens Academy, and served as Exalted Ruler of the Hammond Elks lodge, helping to raise money for cancer research and other charitable causes. His love of the American flag was so deep that he purchased dozens and distributed them to local communities, police departments, families and friends – all with the goal of displaying the Stars and Stripes in as many locations as possible.
He had a long list of pastimes, including bowling, fishing, playing cards, cheering on his Chicago Bears, Blackhawks and White Sox, and cooking some of best tomato sauce outside of Italy. Whatever he was doing, you could inevitably find him with a gin martini or glass of red wine in hand. Fittingly, “My Way” by Frank Sinatra topped his list of favorite songs.
In addition to his parents and wife, Diane, he was preceded in death by his brother Carmine. He is survived by his two brothers, Jim Spataro and Joe Spataro; a sister, Rose Bish; four children: Linda Stutz and her husband, Walt; Lisa Nagel; Mike Mikolajczak and his wife, Tara; Tony Spataro and his wife, Karen; 11 grandchildren; and eight great grandchildren.
To order memorial trees or send flowers to the family in memory of Louis Spataro, please visit our flower store.