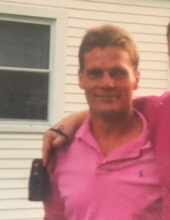 Lindsey Lee Parrish, 55, of Plainfield passed away on Thursday, April 14th, 2022.
Lindsey is survived by his wife, G. Jewell Parrish; his mother, Minnie (Leonard) Parrish of Beanblossoom; his brothers, Jeffrey Parrish and Christopher Parrish of Chesterfield; his daughters, Karina (Parrish) Brown of Perth, Australia and Sydney Parrish of Arizona; his nephews, Austin (wife Heather) and Christian Parrish of Indianapolis, Kendra Parrish of Pendleton; his uncle, Edward Leonard of Chesterfield; his aunt, Virginia Gilbert of Knox, and several cousins.
Lindsey is preceded in death by his father, Billie Parrish of Bertsville Kentucky and his grandparents, Eustace and Goldie Leonard.
Lindsey was a proud Navy veteran. He was very proud of his service and loved his country. He loved to golf. He loved to ride bicycles with Jewell on the local trails. He loved a good card game, especially Euchre. Lindsey was an Elvis man, he could even dance like him. He loved his cat, Jessie. He was an exceptional bartender at Scampy’s. He worked at Miller’s Merry Manor. Lindsey had the gift of gab. He could walk into a room and you felt his presence. He was a happy go lucky guy. He was the kind of guy who could be good at anything he put his mind to.
His ashes will be spread on his family property in Beanblossom, with his grandparents.

To order memorial trees or send flowers to the family in memory of Lindsey Lee Parrish, please visit our flower store.