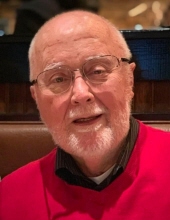 Kenneth Mervin Martin, 87, of Carmel, Indiana, passed away on August 07, 2021 due to complications of Alzheimer's/dementia.

Ken was born on November 5, 1934 to Clyda and Ellis Martin in Elkhart, Indiana. He spent his youth growing up on his parent's farm and helped his dad run a daily bread route. He attended Concord High School in Elkhart through his junior year and attended Hesston College in Hesston, Kansas for his senior year.

After high school graduation, he served in the 1-W Service and then he worked at Ray's Ice Cream prior to working at Continental Can. From there, he became lead singer in the Claiborne Brothers Quartet and kicked off the first Gospel Quartet Convention at the Seattle's World Fair in 1962. Ken was involved as a Youth for Christ Director in the Pacific Northwest until moving his family to Indiana to work with his brother, Allan, at Allan's mobile home repair facility. He next moved into a sales position at Crown Paper Box in Indianapolis for the majority of his working years. He left Crown and took on several more roles prior to retirement: Sandusky Paper and Packaging; courier service; warehouse manager for Pike Township School District which was his final role before "officially" retiring. He then took up delivering travel trailers across the US.
In 1952, he met Norma Ruth Webb of Detroit, Michigan, and they wed in June 1956, going on to have five children, Kenneth Edward, Michael Rae, Timothy Earl, Matthew Ellis, and Jedediah Webb (deceased).

In addition to his jobs, Ken was involved in many volunteer activities. He held the position of Youth Pastor at Calvary Bible Church and Director of Music at Hope Church, both in Indianapolis. He was the lead singer in the Sounds of Hope and Four-Given, both gospel quartets. He was the Sunday School Superintendent, a Sunday School teacher, was the Youth Group Leader for high school, was on the church board, lead a 4-H group and countless other selfless acts.
After 47 years of marriage, Norma passed away from cancer. Ken began spending time with Sally Vysocke whom he wed in April 2004. This increased his family to include Sally's children, Melody (spouse Andy), Scott (spouse Susan), and Vicki (spouse Dave).

Ken was predeceased by parents and siblings (he was the eldest of his siblings Ron, Allan, and Dorothy) as well as his first wife, Norma and his youngest son, Jedediah. He is survived by his sons Ken (Steph), Mike (Shelley), Tim (Amy) and Matt and their respective families including Jed's spouse, Erica. He is also survived by his wife of 17 years, Sally, and her children Melody (Andy), Scott (Susan), and Vicki (Dave) and their respective families. In addition, Kenneth Mervin Martin leaves behind 9 grandchildren, 6 step-grandchildren, 13 great-grandchildren, one step-great-grandchild, and one great-great-grandchild.
In lieu of flowers contributions can be made to College Park Church.
To order memorial trees or send flowers to the family in memory of Kenneth Martin, please visit our flower store.