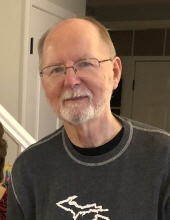 Kenneth L Chandler, of Noblesville, Indiana passed away to his heavenly home on early Christmas morning, December 25th, 2021 at the age of 75.

For 42 years, Ken was employed by Navistar, (formerly International Harvester) on Brookville Road where he held various foundry positions such as inspector, forklift driver, piece worker, and the foundry supply store. While at Navistar, he was active in the local union functions. Ken also served in the Air Force Reserves for 6 years.

As a man of strong faith, he was active in the Zion Lutheran Church in New Palestine for several decades as member as well as trustee, deacon, elder etc. Later, Ken attended St. Paul's Lutheran Church in Indpls until his health declined. Through the years, he also spent many weekends camping all around the state parks in Indiana with his wife, and he loved landscaping and working in his yard. He was a doting grandfather, father and husband. His gentle smile and spirit will be greatly missed, and maybe even his silly jokes...rest in peace Ken.

Forever missed and fondly remembered.
To order memorial trees or send flowers to the family in memory of Kenneth L. Chandler, please visit our flower store.