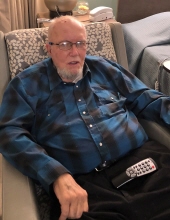 Kenneth E. Reinhardt was called home on Friday, July 30th, 2021. He was 82 years old and living in Indianapolis, Indiana. Ken was born in Cleveland, Ohio on May 31st, 1939 to Kenneth O. and Marian W. (Nossek) Reinhardt who both proceeded him in death. He grew up in Youngstown, Ohio and graduated from Boardman High School where he played trombone in the band.
Ken joined the Navy in 1951, at the age of 19 and traveled the world on the USS America aircraft carrier and USS Barnstable. After retiring from the Navy, he spent more than 20 years working for General Motors as an electrician.
During this time, the family lived in Indianapolis, IN, Muncie, IN and Davison, MI.
Ken was a very active dad supporting his children by coaching baseball and soccer, being a Boy Scout leader, and a Box Dad for the Ben Davis Marching Giants. The family spent many years camping around the state of Indiana, and he loved to play cards, especially euchre. There was little in life he enjoyed more than an ice-cold beer.
While in Davison, Ken was a member American Legion Post 267 for many years. After more than 20 years in Davison, Ken and Marge moved back to Indy to be closer to their kids and granddaughter.
Ken is survived by the love of his life for 53 years, Marge (Marguerite Seitz), his son Kenneth R., daughter Marriann J., granddaughter Gia D., his brother Westley A (Lynne), sister-in-law Patricia Kapinski, sister-in-law Sharon Seitz, and many nieces and nephews.
We want to extend a special thank you to all of Ken’s hospice staff, especially Justin, Jessica, Brian and Becky.
To order memorial trees or send flowers to the family in memory of Kenneth E. Reinhardt, please visit our flower store.