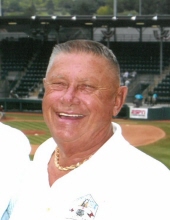 Keith A. Wagner, 85, Of Indianapolis passed peacefully on January 13, 2022. He was born on October 26th, 1936, in Iowa. He eventually moved to Indianapolis where he was employed at Ellis Trucking and later Red Ball International. Keith's, also known as "Wags" true passion was Little League Baseball. In 1966, he started as a coach and then moved on to umpiring and numerous other positions for over 50 years. "Wags" was truly the definition of a dedicated volunteer and was honored to umpire 8 Softball World Series. Keith was also a loving and devoted husband, father, grandfather, and great grandfather. He is survived by his wife, Joan Wagner; son, John (Nancy); daughter, Michele (Mike); son, Rick (Wendy); and son, Kenny (Penny). He is also survived by 6 grandchildren and 12 great grandchildren.
In lieu of flowers, donations can be made to Holy Spirit Catholic Church.
There will be a Celebration of Life at Holy Spirit Catholic Church on Friday, February 4th, 2022. A visitation will be held from 10am until 12pm, followed by a Memorial Mass at 12pm.
To order memorial trees or send flowers to the family in memory of Keith A Wagner, please visit our flower store.