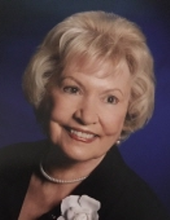 June Marie Cotton (Allen) 94, passed away at Community Hospital North on May 23rd 2021. June was born to Robert and Olive Allen in Buffalo, New York on May 5th 1927. She grew up most of her younger years in New York, and moving to Indianapolis in her teen years.
June graduated from Shortridge High School and then attended St Vincent School of Nursing, where she graduated as a registered nurse. Her years of working as a nurse were spent being employed through St Vincent Hospital in the postpartum department, where she truly enjoyed her job.
June married John Cotton in 1949 and was married many years until they divorced, but remained friends until the death of John. Together they had three children, John, Rick, and Dee.
June was always full of life and enjoyed spending time with her family, attending her church, and a good day at the shopping mall. June was a member of Allisonville Christian Church where she attended until she physically could not anymore. June was also a member of the Red Hats Club, and loved outings with the ladies.
June leaves behind her two sons, John Cotton (Linda), Richard Cotton (Ed), and her daughter Dee Williams (John.) She also leaves behind her granddaughter Christine Domi (Alexander) and her great grandsons Isaach and Matthew. She also leaves behind her beloved nieces and nephews.
June is preceded in death by her brother Robert (Bobby) Allen, and her beloved grandson Brian Fletcher. Where the belief is that they are reunited in heaven. June's final resting place will be at Rest Haven Cemetery (Edinburgh) next to John Cotton.
Funeral arrangements will be handled by Indiana Funeral Care, 8151 Allisonville Road, Indianapolis, Indiana 46250.
Viewing will be held Wednesday June 2nd from 4-7pm
Funeral service will be held Thursday June 3rd at 11am.
Officiating the service will be Reverend Diane Spleth.
The family asks in lieu of flowers that donations be made to the American Breast Cancer Society, where she was a 30 year survivor.
To order memorial trees or send flowers to the family in memory of June Marie Cotton, please visit our flower store.