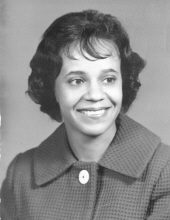 Obituary for Juanita Griggs, September 21, 1931 to April 4, 2022.
Juanita was born September 21, 1931, in Sun, West Virginia the youngest child born to Eddie Boyd Griggs and Mary Griggs (nee Williams.) Juanita was a life-long Christian having accepted Christ as her Savior as a young child. She was an Alumnus of Bluefield State College, located in Bluefield, West Virginia. While attending Bluefield State she discovered a life-long sisterhood, joining Delta Sigma Theta Sorority. After a brief career teaching, in 1957 she married Frederic Merchant Jr., an officer on active duty with the US Army. “Fred and Nita had two sons, Frederic III and Duane. Given Fred’s military specialty, they spent 9 years of his 20-year Army career posted in West Germany! Both "Fred and Nita" took advantage of their foreign postings and the family traveled extensively throughout West Germany and Europe, taking opportunities to expose their children to Art, Foods, and Cultures that opened the world to them. Fred Jr. retired from the Army in 1977 and he, Juanita and Duane (still in High School) settled themselves in Indianapolis, Indiana. Within less than six months of her husband’s retirement, Juanita was called back into the classroom, and she became a long-term employee at the Indiana School for the Deaf.
In addition to being pre-deceased by her Parents, Juanita was also predeceased by her Husband of over 40 years, Frederic Laurence Merchant Jr. All of Juanita’s sibling have already been called home prior to her, and there to welcome her to her eternal reward are Frances Griggs; Martha Dawson; Kathleen Lanier; Thomas (“Charles”) Griggs; William (“Billy”) Griggs; Everette Griggs, and Glardine Pleasants.
Immediate family left to cherish her memory are her Sons Frederic L. Merchant III (Denise) of Havre de Grace Maryland and Duane Merchant (Donna) of Indianapolis, Indiana. She is also survived by her Grandchildren, Olivia and Matthew Merchant of Havre de Grace Maryland, and Joseph Nkonga of Indianapolis, Indiana.
As the youngest of eight children, Juanita is also survived by numerous relations, to include cousins, nephews, nieces, great-Nephews and great-nieces! The family would like to acknowledge all the love and support, from mom’s surviving, and deeply treasured family and friends. Among many other places, Juanita will be missed by beloved family members living in Virginia, West Virginia, Ohio, New Jersey, Vermont, Michigan, Maryland, North Carolina, Alabama, California and Alaska!
It is said that “pride is the greatest sin,” so rather than of telling everyone how much “pride,” Juanita had regarding her family and friends; instead, we highlight the immense satisfaction and deep joy that Juanita received secure in the knowledge that her family and friends consisted of intelligent, hard-working, honest people who have modeled these virtues for their own family and to their greater community. She would tell us to wish God’s Blessings on all of you and your families!

To order memorial trees or send flowers to the family in memory of Juanita Merchant, please visit our flower store.