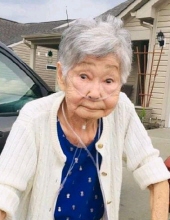 Indianapolis – 92, passed from this world on the evening of December 28, 2021, at home, and took her last breath in the arms of her eldest granddaughter with whom she had a very close relationship. Affectionately known as “Obaba” or “Jo” by many who loved her, Josephine was born in Lihue, Kauai, on March 26, 1929 to Masato Mukai and Hanayo [Tada] Mukai; both preceded her in death.

It was in Hawaii that Josephine met and wed Raymond Clevenger, who had been stationed on Oahu with the U.S. Navy, and subsequently relocated with him to Indianapolis. Although they would later go on to divorce, their union was blessed with four beautiful daughters; Josephine never remarried. In her professional life, Josephine tinted lenses and retired from Bell Optical Labs. Prior to and during her retirement, Josephine also worked part-time as a Laundress at the Little League Central Regional Headquarters.

Josephine was very social and loved chatting on the phone with her many friends and ohana and made every effort to stay in touch with as many people as she could. In her younger years, Josephine enjoyed playing Euchre and was an avid gardener and adored Calla Lilies, Peonies, Hydrangeas, Bird of Paradise, and Rose of Sharon just to name a few. Even when she was no longer physically able to garden herself, she remained very involved in the instruction and oversight of planting activities that took place at home.

In addition to her parents, Josephine was preceded in death by two of her sisters: JoAnn Kessinger and Jane Arita, as well as two brothers: Robert Mukai and infant James Mukai.

A private family cremation was held on Tuesday, January 4, 2022 at Indiana Funeral Care in Indianapolis. The scattering of her ashes will take place on Kauai at a later date. The family requests no koden be sent.
To order memorial trees or send flowers to the family in memory of Josephine Clevenger, please visit our flower store.