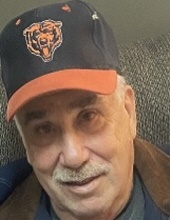 Eddie was born on April 19, 1945 in Columbus, Kentucky to Joseph “Leon” and Uneda (Mofield) Burgess.

Eddie grew up in Kentucky and then moved to Indianapolis where he graduated from Manual High school.

In his early career, Eddie served in the United States Air Force and worked as a foreman conductor for CSX Railroad. Years later he co-owned NorthEast Wood Lounge where he loved making food.

Eddie's hobbies included fishing, stock car racing, golfing, cooking delicious southern style food, watching any sports games, and going to auto auctions. Eddie loved being able to make food and give it to others in need around his neighborhood.

Eddie is survived by his son, Joey (Cassandra) Burgess; granddaughters, Lucille, Scarlett, and Emery Burgess; brother, Keith Burgess; as well as several aunts, uncles, and cousins out of Kentucky and a large amount of friends around the Irvington area that he would drink coffee with each morning that loved him like family.

There will be a small celebration of life at Southeastway Park Saturday April 23rd, 2022 by the playground from 12pm-2pm. Bring a story to share!

In lieu of flowers please consider donating to a local mission, church, or charity of choice.
To order memorial trees or send flowers to the family in memory of Joseph Edward Burgess, please visit our flower store.