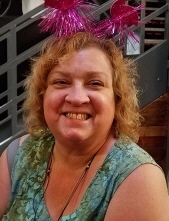 Joni Mayhew Hand died unexpectedly on October 24, 2021 at the age of 66 while vacationing in Corpus Christi, Texas.

Joni was born in Columbus, Ohio on October 14, 1955 to Jack & Fay Mayhew of West Jefferson, Ohio. Joni, her big brother, Jackie, and her baby sister, Teresa, lived in a small house by the railroad tracks, built by her father and grandfather. She would occasionally get to go into Columbus with her mother and grandmother to go shopping and have lunch at the Tea Room of the Lazarus Department Store. Her Papaw would always pull her aside before they left, take out his coin purse, and give her a little “foldin’ money” for the trip. She would use that money to go to the book section of store to buy a book while her Mom and Grandma finished their coffee and dessert. This was her favorite part of the trip because she loved the smell of a new book!

She attended West Jefferson Grade School through 5th grade, when her father’s job with the New York Central Railroad took them to Indianapolis, where they lived on the east side. She attended Holy Spirit and St. Mathews grade schools where she was not only an exceptional academic, but head cheerleader for football and basketball teams.

She attended Chatard High School where her bubbly, bouncy runs down the halls, along with her short skirts and go-go boots caught the attention of one young boy by the name of John. In early February of 1972, a chance conversation over french fries and shakes at Steak ‘n’ Shake between Mike Grisham, John’s best friend, and Kathy Rische, Joni’s best friend, revealed that John and Joni had a mutual interest in each other. John summoned up the courage to call Joni and ask her out for dinner and a movie that Friday, February 18, 1972. At the tender young age of 16, these two kids, who didn’t know anything about life, generated the spark of love that would continue to burn forever. Over the next few years, they were inseparable. They graduated from Chatard in 1974 and on May 30,1975 the two became one, despite the objections of every sane adult in both families. Who thought that two 19 yr old kids could make it together in this world??

After the birth of her two beautiful daughters Jenni & Lindsay, the family moved to Corpus Christi, Texas and then LaVale, Maryland, making lifelong friends along the way, before settling in Brownsburg, Indiana in 1988. Joni worked as an Office Manager for Cindy’s Hallmark store for 14 years and then as a Payroll Specialist at Hendricks Regional Health for another 14 years. She retired in 2012 to spend more time with her grandchildren, who called her “Totsie”, a nickname that she earned and embraced in Corpus Christi because she wouldn’t go down to the 7-11 without mascara, which made her “Totsie Ta”.

Joni was an amazing mom. She gave endless love and support not just to her two daughters, but provided an open door, a full fridge and support for all of their friends who always referred to her as “Mom”. She gave great hugs, loved singing in the car, taking a Sunday nap, and curling up with a good book. Her love language was gift giving, and was so strong that Amazon will now have to reforecast their quarterly earnings. She was also spirited, and woe to the person who crossed her and brought out Mama Bear or Queen Cusser Totsie!

She was a delivery driver for Hendricks County Meals on Wheels and was always making sure that the Blessing Boxes in the Brownsburg area were full of things, and was passionate about making sure there were items to make a whole meal and fun things for kids to eat, not just basic sustenance.

Services will be held on Saturday, November 6 at Indiana Funeral Care, 8151 Allisonville Rd, Indianapolis, IN 46250. Visitation will be held from 10:00 a.m. - 1:00 p.m. with services immediately following.

Since there will be no internment, in lieu of flowers, the family asks that donations be made to the following organizations that Joni supported:
• Meals on Wheels of Hendricks County https://www.hcmealsonwheels.org/donate
• Blessing Boxes of Brownsburg brownsburgblessingboxes@gmail.com
• No One Left Behind Outreach nolboutreach@gmail.com
Indy Reads Literacy Programs https://indyreads.org/ways-to-give/
To order memorial trees or send flowers to the family in memory of Joni Hand, please visit our flower store.