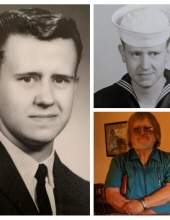 He was born on Tuesday, July 30, 1946 to Ray and Juanita (Winsted) Morrison in Plainfield, Indiana. He grew up in Plainfield and graduated from Plainfield High School. After high school he worked at Allison Transmission for a short time before being drafted into the United States Navy. He served two tours in Vietnam before being honorably discharged in November of 1968. After his time in the Navy, he returned home and to his job. He worked some in the plant but for a majority of his 54 years there he was a truck driver, locally going from plant to plant.

John was a member of The Grand Lodge F&AM of Indiana, Belleville Lodge No. 65 since 1982, The Murat Shriners International, and Ancient Accepted Scottish Rite Northern Masonic Jurisdiction of the United States of America since 1983.
One of his most loved hobbies was to work on and rebuild classic cars, and he was really good at it. He had many over the years including his 65 Chevy Malibu SS and rebuilding his Dodge Ram truck.

He is preceded in death by his parents, Ray and Juanita Morrison, and sister, Delores Grimes.

Graveside service will be Wednesday, January 5, 2021 at 11:00 am at Maple Hill Cemetery, Plainfield, Indiana.
To order memorial trees or send flowers to the family in memory of John Robert Morrison, please visit our flower store.