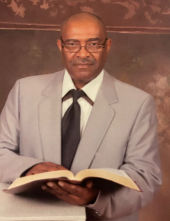 Joe Lewis Matthews, II, 73, returned to his heavenly home on September 30, 2021, after a valiant battle of illness. His devotion to his family and his firm belief in God supported him in his struggle and ultimately gave him peace.
Joe was born to the late Irene Hall and Joe Matthews, on January 23, 1948. He received his early education in Blytheville, Arkansas and graduated from Richard H. Harrison High School. Later he moved to Indianapolis, Indiana where he retired after 30 years of dedicated service as a Head Machinist for Link Belt Motor Company and later retired from Indianapolis Public Schools.
Joe was baptized and filled with the Holy Ghost at Faith Apostolic Church where he served on several committees including the Prayer Board, Deacon Board and Usher Board. Later he became an active member of God’s Love Total Care Church where he continued to be faithful in ministry.
Joe was joined in holy matrimony to his loving wife Pamela Jean Matthews on May 18, 1990; together this union combined 12 beautiful children. They shared 31 years of marriage. His wife, Pamela was faithful and stood by his side through his sickness and the last breath he took. She amplified the true meaning of “until death do us part”. Joe raised 12 children with patience, discipline, and humility.
Joe is survived by his loving wife, Pamela; his sons Joe (Joi) Matthews, Jr, and John (Lakiea) Matthews; his daughters LaShawnda Matthews, Lisa (Victor) Matts, Latina Matthews, LaRene (Paul) Rayner, and Mildred Matthews. Stepchildren, Janet (Mark) Smith, JoAnn Mosley and Rance (Marcia) Davis; brothers Leroy (Maxine) Hall, Henry (Rosie) Jeffries, Larry Hall, James (Anita) Hall, and James Stewart; sisters, Janet (David) Shepherd, Erma Williams, Lorraine Stewart. Thirty-three (33) grandchildren and (5) five great-children. He is proceeded in death by his sister Proginger Cruther; daughter, Jennifer Matthews and stepson Willard Mosley, Jr.
To order memorial trees or send flowers to the family in memory of Joe Matthews, please visit our flower store.