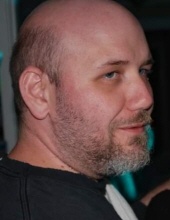 Jesse was born April 29, 1976, in Beech Grove, Indiana, to Michael and Rosemary Handlon. He was a prolific writer and filmmaker. He was a founding member of the comedy troupe Weirdsville, a founder and partner in the film production company Sideshow Productions, and the co-creator and co-host of the Half Hour of Power podcast.

He is survived by his sister, Susella Dorsey; his brothers, Michael O’Shayne Jr. and Patrick O. Handlon; and his nephew, Patrick Dorsey Jr.

In lieu of flowers the family requests that donations be made to Autism Speaks. (https://www.autismspeaks.org/)
To order memorial trees or send flowers to the family in memory of Jesse Ray Marion Handlon, please visit our flower store.