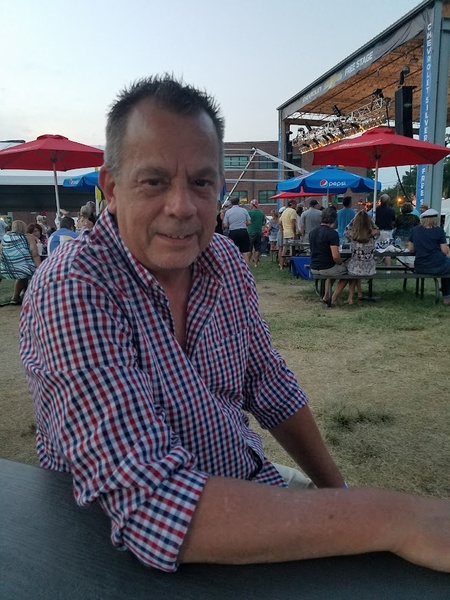 Services for Indianapolis native Jerrold Wesley Smith, will be held from 7 to 8 PM Wednesday, July 6, at Indiana Funeral Care, 2433 E. Main St., Greenwood, IN. Calling will be prior to the memorial service from 5 to 7 PM.

Jerry passed away peacefully on June 29, 2022 surrounded by family.

His working life was spent in the printing industry, especially large scale photo reproduction, blueprints and building plans. He worked in sales for his family business, Three S Reproductions, Inc., from its founding in 1987 until its closure in 2006. Jerry was the third "S" in the company name after his father John, and brother Jeff.

A significant portion of his adult life was spent as a musician in and around Indianapolis. His creative talent was recognized by many local players who tapped him as a sideman and collaborator. While a teenager, he joined his brother Jeff as founding members of the local art jazz combo, Today's Young Talent, for which he played drums. Through the years Jerry expanded his skills to include keyboards, and drum machine programming. He also established JWStudio Pro, a recording and production studio, in his home.

In the 1990's, the live blues music scene in Indy was growing. Hal Yeagy, owner of the Slippery Noodle, Indiana's oldest, continually operated bar in its original building, hosted blues nightly. Jerry was

part of the "house band," The Mean Weenies, fronted by Jerry "Blues" Booth. JWStudio has several cuts of the band posted on YouTube. Smith also served stints with Bahama Llama band, and blues guitarist Governor Davis which involved playing at venues throughout the Midwest.

Jimmy Valdez, who played bass with Governor Davis when Jerry was in the band, posted a lengthy tribute on Facebook. "His joy for life and love seamlessly translated into his music," he wrote. "A true player who played what he felt and played thru his heart." "Nothing gave me more pleasure than knowing I was going to share the stage with J. Wesley," Valdez added, and shared the following story:

"I remember one of the first times he played with Governor Davis and The Blues Ambassadors and we      talked about too bad he couldn't go dancing around with me and the Gov. He said, "No problem!" and the next show he set his keyboard on fire during his solo. There was nothing Gov. or I could do to top that."

Arguably, the most enduring achievement of his career as a professional musician came through his fruitful working relationship with "Heartland Rock" guitar legend, Larry Crane. "Playing with JW all these years has been a gift," Crane wrote in a note to the family.

"He was always the best at his instrument more than anybody in the band. Oh, by the way, never call him a keyboard player.  He hated that. He played piano and B3 organ - thank you very much. His style of playing was definitely a reflection of his personality: unpredictable, sometimes kind of crazy, but never boring. There were times on stage when a musical piece might be going a bit long and frankly getting boring. With Jerry there, I always knew what to do. I would look over at him and give him a nod. He would look back with that devilish grin of his, hunker over the piano just a bit more than usual, and for the next few minutes we would get bombarded with the most off-the-wall, jazz meets heavy metal craziness you had ever heard. Not a big jazz fan myself, but when Jerry played it, it all made sense to me.

Crane also commented on Jerry's character, "He always had a gentle closeness to people, especially myself and all of our band mates. There was never a time that we were together when there wasn't tons of laughter and shared brotherhood. I will always miss that, but the memories will always remain."

Despite his busy schedule, Jerry and his wife Tonja found time to volunteer with Indianapolis Animal Care and Control and Southside Animal Shelter while also providing a foster home for numerous cats.

Jerry also loved to entertain, often hosting gatherings for his workmates and for his wife's colleagues.

He was an accomplished woodworker, building cabinets and tables for his home and upcycling a shed into a backyard bar. During the pandemic, he spent a lot of time playing pool.

Jerry's brother Jeff will lead the memorial service and the family requests that friends come prepared to speak or to write something out for Jeff to read, or to bring a guitar and share a song.

To order memorial trees or send flowers to the family in memory of Jerrold "J. Wesley" Smith, please visit our flower store.