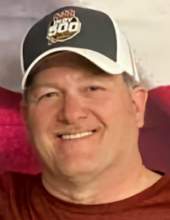 Jeffrey William Bowman was born to the late Donald and Rita Bowman in Lebanon, Indiana, on July 8, 1966.


Jeff loved his family and friends and enjoyed spending time with them: Hiking in Brown County, attending Big Bad Voodoo Daddy Concerts, camping at Kevin’s, riding in the boat on Lake Tippy, playing games, especially card games, watching Brandon and Logan bowl, riding bikes, cook-outs and going to the Indy 500 and drag races. And He couldn’t wait for the times that Rayne was in town to visit with her.


Jeff was a passionate bowler, since his teenage years, bowling in many leagues. In fact he bowled so many perfect games that he lost track of the number. He won the USBC regional championship in the mid-90’s and in 2021, he won the inaugural USBC Indiana State Senior Masters’s Tournament.


Jeff was an avid sports fan, both playing sports and watching them, especially IU basketball and the St. Louis Cardinals. Every summer he and Lisa would be at Busch Stadium cheering on the Cards and most winters, he was in IU’s Assembly Hall for a game or two. The St. Louis Blues hockey team was another winter passion.


He is survived by his wife, Lisa: his daughter, Brittany Bowman, his son, Brandon Bowman(Jen); his step-daughters, Kara Spencer (Lucas) and Alyssa Hammond (Jameson); step-son, Logan Spratt; his grandchild, Rayne and step-grandchildren, Izzy, Lainey, Krew and Trace; his sister, Terri Hogue. He is preceded in death by his brother, Kenny Bowman and his parents.


In lieu of flowers, donations can be sent to:
The Royal Pin Scholarship Fund
Via Western Bowl
Checks made to Western Bowl
6441 W. Washington Street
Indianapolis, IN 46241
Or
Credit card charges
317-247-4426
Ask for Steven Frank or Jennifer Ferguson
To order memorial trees or send flowers to the family in memory of Jeffrey William Bowman, please visit our flower store.