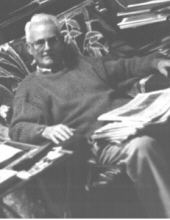 Jeffrey Frederick Bower, 99, of Indianapolis, Indiana passed away in his home on March 22, 2022.

Jeffrey was born in Newnham-on-Severn, Gloucestershire, England on June 12, 1922 to Frederick Risely Bower and Mary Ruth Latchem. The eldest of five children, he grew up in nearby Cinderford.

He was a veteran of the Second World War serving in the Royal Air Force (RAF) and achieving the rank of Flight Lieutenant. He piloted Wellington and Lancaster bombers but his favorite plane to fly was the de Haviland Harvard trainer. It was during RAF flight training that he made his first visit to Canada.

After the War he remained in the Royal Air Force Reserves until immigrating to Toronto, Canada in the early 1950’s where he served for several years in the Royal Canadian Air Force (RCAF) Reserves.
He began his professional career just before the War, working in London for a company that used business machines to maintain pay records for the RAF. He volunteered for the RAF when he learned that his job was to be classified as ‘protected’ and that he would not be able to serve in the military.

He returned to that job after the War and those business machines evolved into modern computers. Most of his career was with RCA with whom he was transferred from Canada to Indianapolis. After more than 50 years in the information technology field, he retired from Thomson Consumer Electronics a few years after they acquired RCA.

In retirement, he was very active and was a devoted grandparent, dedicating all the time he could to his grand children and their pets. He also had an interest in gardening, landscaping, genealogy, and personal computers, which he had dismissed as ‘toys’ while he was working on mainframes.

He was always health conscious and lived a long and full life. He will be forever missed.

Jeff contributed to and was involved with many charitable organizations. In lieu of flowers, donations to any of the following organizations in his memory would be appreciated.
• Save the Children
https://www.savethechildren.org/

He never wanted anyone to fuss over him, so per his request, there will not be a memorial service.

To order memorial trees or send flowers to the family in memory of Jeffrey Bower, please visit our flower store.