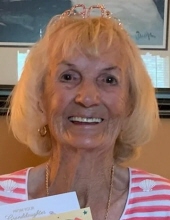 Jean Elizabeth (Liz) Wilson, 92, of Southport, passed away November 9, 2021. She was born May 23, 1929, in Chicago, Illinois then raised in Indianapolis. Her parents (Helen (Rairdon) Clark and William H. Clark) and her beloved brother (William E. Clark) preceded her in passing.

During the depression, at the tender age of six, she picked up coal off of the City’s railroad tracks to heat the family’s home instilling in her a strong work and family ethic. Due to family issues, she worked rather than complete high school which compelled her to pursue her education through life-long learning. She and her former husband, Byron Franklin (Frank) Wilson Jr. (deceased) raised three children in the 1950’s and 1960’s. Jean was self-taught, an avid reader, and shared her love for education and music with her children. In the 1970’s, she worked downtown at L. S. Ayres as an electrolysis. She started her own business in the late 1980’s and worked till late in her life. She met the love of her life, Michael (Mike) Kestler, a retired police officer who served for the City of Indianapolis. Mike’s two children joined the circle of her family when Jean and Mike married in 2002. Their love for each other continued until his death in 2012.

Jean was fiercely independent. She could be quite candid with anyone and everyone but always had a wide circle of close friends. She loved landscaping her yard, entertaining her family at Thanksgiving and Easter, finding the best sales for gift giving, and serving as a Reader at St. Patrick’s Catholic Church. She was a master of many skills including gardening, returning unwanted items back to the store, and had an advanced knowledge on the power of supplement vitamins and minerals for good health. Aging was an annoying distraction to her, but she never let it hold her back from living life to the fullest.

Jean is survived by her three children, and two stepchildren: Beth A. Grigsby and her husband, Robert (Bob); William (Bill) F. Wilson and his wife, Barbara; Thomas M. Wilson and his wife, Sharon; Sean Kestler; and Kelly (Kestler) Stuckey and her husband, Jim. She will be lovingly remembered by her nine grandchildren, eleven great-grandchildren, and three nieces.

There will be a celebration of her life for her friends and loved ones after the holidays to share “mom” stories. Please let us know if you would like to attend when sharing a memory of her on the Indiana Funeral Care Obituary website.
To order memorial trees or send flowers to the family in memory of Jean "Liz" Elizabeth Wilson, please visit our flower store.