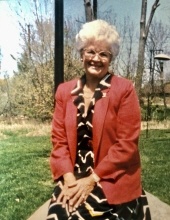 Janie Lou was born February 26, 1925 in Evansville to the late Harvey and Georgia Harris. She attended Bosse High School and went on to attend National College of Education in Evanston, Illinois where she received her Bachelor of Education. After college she moved to Indianapolis and became a kindergarten teacher at Tudor Hall. Shortly after, she met her first love, H. George Mueller and they married in 1949 and children came soon after.

Janie Lou was very involved in volunteering her time to many organizations....The Junior League of Indianapolis, The Christamore Aid Society (past President) and the Christamore Follies, Crossroads, the James Whitcomb Riley Home docent, The Eiteljorg Museum, Lockfield Gardens and the Lambs Club where she performed in their shows. She, also, loved to play tennis at Meridian Hill Country Club and the Indianapolis Racquet Club, had great fun playing with her bridge club and loved time up at the Mueller family cottage at Lake Maxinkuckee in Culver, IN every summer. Janie Lou enjoyed travel which she did often with George for their family businesses, Mooney-Mueller-Ward, Co and then Stadium Distributing Co. Every year she would travel with her ‘Sub Deb’ friends from Evansville and the couples would meet in various locations across the country and keep their close friendships alive. In the 60's, she and George, also, had established a family vacation home on Sanibel Island, Florida. George died in September 1984 after a hard fought battle with melanoma. They had a beautiful 35 years of marriage.

Janie Lou was blessed with renewing a friendship with Jack W. Bailey. In June 1990 they married and blended their families. Jack and Janie Lou were very involved at Meridian Street United Methodist Church and participated in many mission trips to the southwest United States. They volunteered with Native American families and communities and fell in love with their culture. They both loved the Bailey homestead on Eagle Creek Reservoir and loved to entertain family and friends.

In 2013, Jack and Janie Lou established their apartment residence in the Deercrest building of Hoosier Village. Many thanks to all of the staff at Hoosier Village who got to know and loved both Jack and Janie Lou. Janie Lou was well known for their antics, like riding on the front of Jack's electric scooter on the way to dinner and being very outspoken. From there they moved into the Health Center. Janie Lou spent a few years in Hickory Hall Memory Care until returning to the Health Center after Jack's passing in 2015. She loved to sing and did so up until about a year before her passing. The staff was very helpful and every one "knew" Janie Lou and her sweet smile.

We all love you mom, Grandma, GiGi. We will miss you greatly and forever.
To order memorial trees or send flowers to the family in memory of Janie Lou Bailey, please visit our flower store.