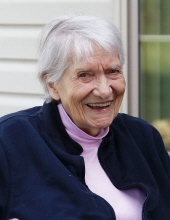 Janet S. Peoples, 102, passed away quietly at home from natural causes on August 30, 2021. Her life was a most unlikely one for someone who was never expected to survive her infancy. Born addicted to morphine during the influenza pandemic of 1918, she was delivered by a doctor who was so confident that she wouldn’t live that he didn’t fill out her birth certificate until days later (and then did so incorrectly, putting down that she was a boy). As many people discovered over her more than a century of life, however, Janet was made of sterner stuff. She survived and thrived, and lived to see four children, twelve grandchildren, and eight great‐grandchildren.

Janet grew up in and around Carthage, Illinois, the youngest of four children. Her many stories of her colorful family and their adventures have entertained her descendants for years: her grandfather who tried to stop his new car by pulling on the steering wheel and yelling “Whoa!” (and then crashing into the barn), her attempts to ride a cow using a carrot on a stick, and her favorite doll, Minerva Jane, who was both companion and (thanks to a large tin head) self‐defense device. She was a bright student, graduating high school at 16 and enrolling in Western Illinois University to become a teacher. While in college, she saw the tallest man in recorded history, Robert Wadlow, and heard Amelia Earhart speak. After graduation, she taught in a one‐room schoolhouse in southern Illinois. Although she rarely was able to travel in her younger years, she attended the New York World’s Fair of 1939, and among many other marvels saw the first television. In the early 1940’s, she moved to Indianapolis. There she worked at what was then the Lukas‐Harold Corporation, also known as the Naval Ordnance Plant, first as a wiring inspector for the famous Norden bombsight, and later as a secretary in the Mathematics department. It was there that she met and married the love of her life, J. Fred Peoples.

Janet endured more hardship and suffering in her life than most. Her parents were not well off, and the first house she lived in had only two rooms, a kitchen and a common room for living and sleeping. She lived through the Great Depression and two world wars. Her oldest brother, Neil (“Bud”), disappeared in the early 1960’s and was never found; a tombstone in the cemetary at Carthage commemorates him, but never brought closure to the family. She had almost given up hope of having a family of her own, and was in her late thirties before finding happiness with Fred, but that too was relatively short‐lived. After seventeen years together, she lost Fred to heart disease and was left to raise her four children by herself with very limited resources. In her 80’s, Janet survived a bout with breast cancer.

All who knew her well, however, knew that Janet always looked on the bright side. She was a happy person with a lively sense of humor, and when she especially enjoyed something funny, she would say it was “HI‐larious.” Her children fondly remember surprise trips to the old Indianapolis zoo or picnics at Holcomb gardens, sometimes followed by ice cream sodas. Janet made the most with what she had, and while she let her children know that her money was very limited, she somehow found a way to not only feed and clothe them, but to make memories together. This included taking them on vacations, even to Hawaii. When her children grew and were on their own, Janet toured the world, including going hot air ballooning and skydiving in Australia in her late 70’s. She was also unflappable, whether one of the kids started a fire in the kitchen, glued the telephone receiver down so it couldn’t be answered, caused an explosion with his chemistry lab in the basement (ahem), faked an alien invasion to ruin his sister’s slumber party (ahem, ahem), or stayed out far too late (ahems all around), she was never fazed. Despite their many shenanigans, their mom was always their biggest fan and supporter. And if something broke and couldn’t be fixed with duct tape, it wasn’t worth worrying about. Her children’s friends remember that Janet always had a warm welcome and plenty of snacks for them. When she eventually became a grandmother and then great‐grandmother, she relished being “Granny” to so many, and loved them all dearly.

The secret of Janet’s joy and strength, however, and the essential element in her story, was her quiet, but rock‐steady, faith in Christ. Her children saw this most when their father died, and Janet told them that she could be their mother, but not their father – God would be their Father now. They learned to trust God because they saw their mom trusting God. Her favorite Bible passage, Psalm 16, says, “With Him at my right hand, I will not be shaken.” Through it all, she was not shaken. She was a long‐time member of Tabernacle Presbyterian Church, then Grace Presbyterian Church. Janet’s was an active faith, and she was generous with her time and finances. She also had a kind, compassionate heart. When she was in her 90’s, she made the television news in Indianapolis when her purse was snatched in the grocery store. In typical fashion, she was most concerned about the plight of the woman who had taken her purse, and reached out to help her.

Although she spent most of her life in the suburbs and city of Indianapolis, and even lived in California for a short time in the 1940’s, in her heart of hearts she was always an Illinois country girl, and in her last days could be heard singing some of the songs she used to sing with her family and friends in the 1920’s around her grandma’s player piano in western Illinois. In the end, having been surrounded in her last days by family, she passed peacefully into the arms of the Savior she loved so well.

Janet is survived by her four children, John (Mary Alice) Peoples, Martha (David) Langebartels, Bob (Kathy) Peoples, and Peggy Kriese, as well as twelve grandchildren and eight great‐grandchildren. Visitation will be held at Grace Presbyterian Church, 7900 Allisonville Road, Indianapolis, IN 46250 beginning at 10 am on Saturday, September 11, with a funeral service to follow at noon.
To order memorial trees or send flowers to the family in memory of Janet S. Peoples, please visit our flower store.