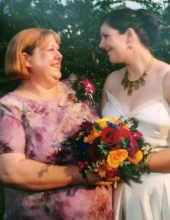 On October 12, Janet Roeschlein lost her 3 year battle with lung cancer. She passed peacefully with her daughter by her side after a visit with your grandson.

She was born on December 17, 1954 to Jean and Eugene Roeschlein and grew up in a single-family post World War II house in Lawrence, Indiana with her siblings Doug, Elwood, Dorothy, Steve, Wanda (Black), and Howard. She went to school at Lawrence Central High School class of 1973. After graduating with a nursing degree from Pierce College (WA), she married briefly and followed her husband Dennis on an overseas deployment to Heidelberg, Germany. This is where her daughter Jennifer was born.

The couple moved stateside to Seattle and were divorced. Janet took a position as a trauma nurse in the ER department and her sister Dorothy moved out to help her raise Jennifer. Janet's quick and sarcastic wit as well as a love of caring for others helped her greatly during this time in her life. She had an infectious laugh and was able to comfort patients in times of crisis. She was also able to organize her co-workers well, and was later promoted to the pharmacy department. As a single mom, she raised a strong daughter. Janet was called to move back to Indiana when her mom fell ill.

Janet cared for Jean until she passed and stayed at home to help her dad until his passing as well. During this time, Janet became very active in quilting and sailing. She was often at family events with gifts she had hand-crafted. She was a regular at the Indiana State Quilt Guild retreats and followed the Indianapolis Sailing Club Y-Flyer fleet for weekend regattas and camping.

Later in life, she opened her home to help care for her grandson Owen and his friends after school. Her house became the center of the neighborhood as it rang with laughter, love, and the occasional discussion of homework. Janet was accompanied by her two Collies, Grace and Kelly. She loved those dogs as much as she loved her family and friends. Janet also kept a watchful eye over her neighbors as they battled early-stage dementia. Janet would often check-in and was delighted when they chose to return her kindness with fish dinners on Friday nights!

Janet moved in with Jennifer's family when she was diagnosed. Asked her what she wanted from life at this stage, she answered with a short list. 1) Cook good dinners with her daughter 2) Quilt with her friends and family 3) Watch her grandson grow. She did that, and did it well. Amazing smells from the kitchen wafted through the house every night beginning around 5pm as the family arrived home from school and work. She continued traveling as able to attend family events, quilting retreats and even made a trip to Disney Land! When she was at home, she was a huge fan of bad sci-fi movies, the Walking Dead, and the Andy Griffith show. Yes, a very unique sense of wit and a great laugh.

Janet was preceded in death by her mother, father, and siblings Doug and Dorothy. She leaves behind her daughter Jennifer, son-in-law Les, grandson Owen, her brothers and sister, several nieces and nephews and their extended families, friends from sailing and quilting, so many hand-crafted quilts, a jeep, and a recipe box that is unbelievably stocked with amazing delights! She cared for each soul she met, and she leaves behind a beautiful memory with each and every soul she cared for.

In lieu of flowers, the family requests donations be made in Janet's name to the American Cancer Society.

In lieu of a memorial, the family will gather for a private celebration of life and asks that any event which Janet would have attended, you raise a glass and tell a story and laugh! Janet will not be far.
To order memorial trees or send flowers to the family in memory of Janet Roeschlein, please visit our flower store.