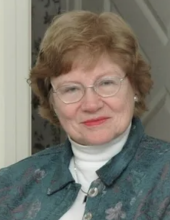 On Wednesday, September 8th Jane Louise Henderson (née Rapp) passed away in Indianapolis, Indiana of natural causes. She was 88.

Jane was born on March 22, 1933, in Oak Park, Illinois. She attended Stephens College and then the University of Missouri, both in Columbia, Missouri. A math prodigy since her youth she completed a B.A. in theoretical mathematics at the age of 19. She met Robert Henderson at the University of Missouri in a physics class he was teaching and they married in December of 1952. They had 4 children, Jane Ann (Annie), Elizabeth Louise (Libbie), Carol Nellie, and Katherine Sybilla (Katie). They divorced in 1968.

Jane was a supporter of civil rights causes in Indianapolis and enjoyed her many years living in the Butler Tarkington Neighborhood. She was active with the League of Women Voters, attending their meetings and serving as a poll watcher on election days. Always interested in natural processes she was the co-founder (with Betty Ann Countryman) of the Indianapolis chapter of La Leche League. Her daughters carried on this legacy by successfully breastfeeding their own children and have been lifelong promoters of the many positive aspects of breastfeeding.

A great admirer of fine arts she loved training and acting as a docent at the Indianapolis Museum of Art. She particularly enjoyed hosting visits from school children. For many years she worked as a remedial mathematics teacher at IUPUI. In addition to regular class time she spent numerous hours outside of class working with students who needed extra attention in order to master the material.

Jane was preceded in death by both her parents William Christian Rapp and Louise Margurite Rapp (nee Schultz) and is survived by all four of her children along with 4 grandchildren; Cassidy, Becca, Rose, and Cara.

There will be a visitation on October 23, from 1-3PM at Indiana Funeral Care, 8151 Allisonville Rd. Indianapolis, IN. Donations to the Nature Conservancy are suggested in lieu of flowers. If you would like to contact the family please email janerapphenderson@gmail.com
To order memorial trees or send flowers to the family in memory of Jane Louise Henderson, please visit our flower store.