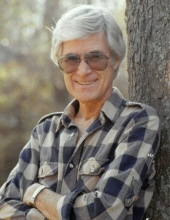 He had 2 brothers and one sister. He was a graduate of Lincoln High School in Lincoln, NE. He was the Senior class president as well as a singer with several school choral groups. Jimmy joined the Army in 1942. He was stationed at Camp Atterbury in Columbus, IN. During that time he would take a bus from Columbus to Indianapolis to shop for sheet music and records. That is where he met a very special lady who worked for Pearson’s Music Co. in downtown Indianapolis. Once he saw her, he was “smitten”! After he returned to Pearson’s Music Store, several times, the salesgirl invited him to her radio broadcasting class at The Jordan Conservatory of Music, at Butler University, where she attended. After he went to the broadcasting class, he was hooked! He knew right then that after the war was over he would pursue a career in radio broadcasting. That special gals name was Peggy Million. They fell in love and got engaged in 1944.

Jimmy was sent overseas to work in admissions at the 231st Station Hospital at Morley Hall, Norfolk, United Kingdom. It was a military hospital to support 15 Heavy Bomber bases. The patients were casualties from high-altitude missions flying over enemy territory. While stationed at the hospital, the commanding officer, Colonel Linwood Gable, decided he needed to incorporate music for the morale of the service personnel and patients. Jimmy became the singer with the “Gable Gators Orchestra”.

Jimmy was thrilled when Major Glenn Miller came through the 231st Station Hospital to visit the service personnel during his tour of England with his Army Air Force Band on August 18, 1944.

On May 7, 1945 The Gable Gators were given an opportunity to record a song at the Broadcasting House in London. It was sent through the airwaves over the Armed Forces Network. After an overnight stay in London, the band members were awakened to the news that the war was over! They rushed to Piccadilly Circus in London to celebrate with thousands! That was May 8, 1945. VE Day!

After the war Jimmy and Peggy were married in Indianapolis September 1, 1946. They moved to Chicago where he enrolled in Chicago’s Columbia College of Radio. After graduating, they moved to Benton Harbor, MI where he became a radio broadcaster for WHFB radio. He along with Peggy, became producers of two programs called “Lullabye Parade” and “Melody Mack ‘N Peg”. In 1953 Jimmy got an offer to work at WOOD-TV in Grand Rapids, MI. In 1957 the CBS affiliate of WOOD, WISH in Indianapolis, offered him a position in radio and TV. Jimmy and Peggy made the move with their three children to Indianapolis. In 1958 they produced a radio show called “Teens & Tunes” and a TV teen dance show called “Teen Twirl”.

Jimmy was a choir member of Union Chapel United Methodist Church for 50 years. His singing voice was a special gift from God. He and Peggy taught Sunday School and produced several variety shows at the church. The “Mack Family” were active members of Footlite Musicals. He starred in several productions, but was best know for his portrayal of Harold Hill in “The Music Man”.

At WISH Jimmy was also a disc jockey playing the weekly hits from the Billboard top 100. Jimmy moved onto three radio stations where he was also an on-air personality. He stayed with WIRE, WXLW, and WBRI radio stations until he made the move to WLWI-Channel 13. He had a popular teen dance show from 1965 to 1969 called “Bandstand 13”. He retired from television in 1973.

He began a new career as a professional photographer/videographer. He and Peggy started their company PJM Enterprises. Jimmy did the photography for models, bands, brides, weddings, country clubs, and everything else in between! During the years in Indianapolis he was a DJ for dances, teen clubs, Bar Mitzvahs and Bat Mitzvah’s.

In 2009 Jimmy was inducted into the Indiana Broadcaster’s Hall of Fame. His legacy as a broadcast pioneer will be remembered and admired for years to come!

A father of three children, he is survived by his daughter’s Bonnie Hinkle (Charlie) and Robyn McDowell and son Scott McDowell, his loving grandson’s Christopher (Stefany) and Cory, nephew John McDowell III (Marla), niece Jodi Bickerstaff (Joe), great-nieces Cristy Bickerstaff, Brandi Bickerstaff Adams, and Summer Lynn Geyman (Olivia). He was tremendously saddened by the death of his great-nephew John McDowell IV. His family and friends meant everything to him. The people he touched along the way is far to many to mention. He loved them all.

The McDowell family would like to thank the staff and close friends that our dad made in the past three years at Traditions of Solona Assisted Living. And a special thank you to the Heartland Hospice team for their wonderful care. He truly is at peace. And thank you to all of his faithful friends throughout his 99 years! Thank you all.

In lieu of flowers, donations to the Union Chapel United Methodist Church music program will be greatly appreciated.
To order memorial trees or send flowers to the family in memory of James "Jimmy Mack" McDowell, please visit our flower store.