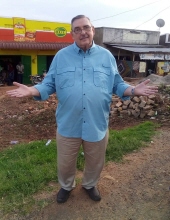 James Michael Doyle, 72, of Cicero, Indiana, passed from this life on Monday evening, October 4, 2021. He went home to be with his wife, Kathy, of 47 years. They spent the last months of her life in the Edgewater Community near Morse Lake, where he became part-time property manager.
“Jim” was the oldest son of James and Louise (Thuis) Doyle, born June 29, 1949, in Sullivan, Indiana. He was preceded in death by his parents, one infant sister, Jamie, but is survived by his four sisters, Patricia Kern of South Carolina, Mary Catherine Korinek of Bloomington, Anne Hatton of Zionsville and Sarah Doyle of Florida. He is also survived by a brother, Al of Bloomington, and five children—Christopher Doyle of Boulder, Heidi Jacobs of East Chicago, Holly Hilligoss, Ryan Doyle and Keely Schlak, all of the Indianapolis area.
Raised primarily in Princeton, Indiana, Jim attended Catholic school and was involved in sports. He married his high school sweetheart, then Kathy Larson, who was a classmate at Princeton High School, graduating class of 1967.
He served five- and one-half years in the Indiana National Guard, missing the Vietnam Draft by one day. His basic training in Fort Lewis, Washington, proved him to be an excellent marksman. He was honorably discharged in 1975.
Beginning his banking career at Gibson National Bank in Princeton, he quickly became a bank examiner for all of Southern Indiana. He and Kathy were betrothed at St. Joseph Catholic Church by Father Egloff on March 16, 1968, and soon began their family. Once they conceived their third child in 1973, Kathy convinced Jim to get off the road and find a “desk job,” which he did with the State of Indiana, overseeing the burgeoning credit union movement. That led to a lifetime of devotion to promoting, advocating and managing credit unions, in Indiana and Florida.
Three of the five children were born in Indianapolis, where the family resided until 1986. That year, Jim landed his dream job at the Florida Credit Union League. Tallahassee became their home until 1989, when circumstances forced a move back to Central Indiana.
Jim’s passion for the Lord inspired him to write a book while in Florida, “A Priest in the Home,” and also to launch a spiritual retreat and non-profit, called North Florida Tres Dias (NFTD). Based in Cursillo, which he attended in the 1970’s, the NFTD Community took off in 1989, just after his move back home. He followed that success with Indy Tres Dias, which he also launched and chaired for many years. Those accomplishments, along with devotion to God and family, were his most rewarding endeavors.
Jim and Kathy shared a love for Christ, family, music and the beach, taking annual vacations to Panama City Beach in Florida. They most enjoyed time with their fourteen grandchildren and five great-grandchildren. They were compassionate, funny, generous, spiritual, musical and outgoing. They spent their later years attending Cicero Christian Church, where they were active in membership.
Jim’s life will be celebrated on Sunday, October 17th at the church, 1715 Stringtown Pike in Cicero, at 5 p.m. with visitation an hour before. In lieu of flowers, the family requests donations be made to Indy Tres Dias, 4477 Redman Drive, Greenwood, Indiana 46142.
To order memorial trees or send flowers to the family in memory of James M. Doyle, please visit our flower store.