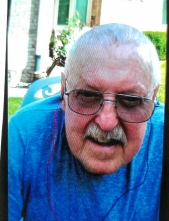 James (Whitey) Edwin Champer Sr. was born on Sunday, August 16th, 1936. Jim worked for 35 years as an Equipment Installer for Western Electric, retiring in 1991.
Jim graduated from Broad Ripple High School. He served in the Army in South Korea in 1960. He liked driving, vacations, and liked to say: "Half the fun was getting there". He also enjoyed fishing. Jim always enjoyed life.
James is proceeded in death by his parents, Herman and Mildred Champer; and his daughter, Brook Stewart.
James is survived by his wife, Janet Champer; his sister, Carol Murrell of Newport, CA; his children, Jim (Dawn) Champer, Tammy (Matt) Burgess, and Debbe (Tom) Corcoran; his seven grandchildren, two great-grandchildren, several nieces and one nephew.
To order memorial trees or send flowers to the family in memory of James Edwin Champer Sr., please visit our flower store.