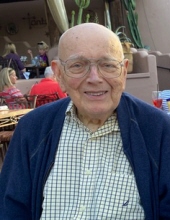 James (“Jim) Shepley (90) died on May 22 in Scottsdale, Arizona. He attended high school in Warsaw, IN. He earned a BA degree in Business and Economics from Wheaton College, Wheaton, IL. His business career was primarily in sales. As founder and owner of Shepley Sound, he installed sound systems in many local churches and businesses. He was a charter member of Faith Missionary Church where he served on the Elder Board for many years. In his younger days he was an active member of United States Power Squadron. Retirement in 1997 took him to Scottsdale, AZ where he volunteered at Mayo Hospital.

He is survived by his wife of 66 years, the former Sue VanSickle of Indianapolis, three daughters, Karen (Tom) Luginbill of Lake Forest, IL, Lynda (Steve) Placeway of Libertyville, IL, and Sherrill (David) Jarvis of Fountain Hills, AZ. He was Grandpa seven grandchildren and “GG Jim” to 9 great-grandchildren.

Open visitation will be on Tuesday, June 8 from three to five o’clock PM at Indiana Funeral Care, 8151 Allisonville Road.

Memorial donations may be sent to Faith Missionary Church designated for the Missions Fund, 9121 N. College, Indianapolis, IN 46240.
To order memorial trees or send flowers to the family in memory of James C Shepley, please visit our flower store.