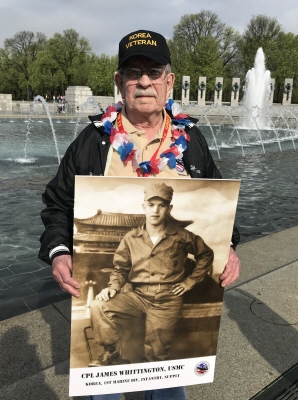 James B. Whittington “Jim” passed away peacefully at his home on March 3rd, 2022, with family by his side. The 88 year old Indianapolis resident was born on January 6th, 1934 to the late Everett Franklin Whittington and Della Mae (Wade) Whittington in Fountaintown, Indiana. Be careful though, if you drive too fast you may pass right through the one stop sign town. Jim was one of 11 children, and on his last visit to his childhood homestead he said, “I’m not sure how mom cooked for all of us, but there was always enough to go around.” He is survived by his remaining Whittington sibling, his loving sister Marilyn Rohrman.

Jim could get you anywhere you needed to go throughout the midwest, and he didn't need a smartphone to get you there. He would blame his “fat thumbs” for not being able to figure out the technology, but his directions were just as good as Apple or Google Maps. Ask his daughter-in-law Nancy (Zebrowski) Huffman, who would drive him around Indianapolis and he’d be sure to let her know if she missed a turn. His GPS-like mind could be attributed to the years he spent driving a semi-truck throughout Indiana and the midwest for many organizations including Kroger.

From driving a truck, to working in the Ford parts department, Jim held many jobs over his well-lived 88 years of life. Although, he is most notably credited with serving our country as a Marine during the Korean War. Jim reached the ranks of Corporal during his time in the Marine Corps, earning several service medals from his time overseas in Korea. You could never miss where Jim lived, as an American flag was always flying outside to show support for his fellow soldiers.

If you managed to find the flag you might have even been able to hear his television from outside the house. Jim had hearing-aids but he felt that they were unnecessary, ultimately contributing to many funny stories during his later years. College basketball was one of his favorites to watch on TV, and if Indiana University ever lost it was likely because the ref’s found a way to make several bad calls. The honorary Hoosier never missed a game, and was hopeful that the team will rebound to their former glory days next season.

One of Jim’s lasting memories was traveling on Honor Flight #29 with his fellow veterans to Washington D.C. His grandson, Zachary Huffman, accompanied him on the 12 hour day of events, touring monuments and shaking hands with appreciative civilians. With tears in his eyes Jim said, “we were never honored like that when we came home from Korea, that trip made it all worth it.”

Jim was adamant that he didn’t want any services after passing, so you won’t find details about when to attend a viewing in this obituary. Outside of being with his close relatives and watching Gunsmoke, NASCAR, or college sports, Jim admired supporting his local VFW. On Indy’s close southeast side you’ll find VFW 2999 where Jim made friends, hosted parties, and was known to pull a few pull tabs on occasion. So instead of attending a viewing, he’d want those reading this to stop by your locally owned bar and give them your support.

If you can’t tell already, he wasn’t really a man of flowers either. Instead he’d prefer you help send another veteran to Washington D.C. and support Indy’s local Honor flight program at the following link. https://indyhonorflight.org/donate/ Or you can make a donation to Local VFW 2999 in his honor, to support youth sports and community initiatives throughout SouthEast Indy.
To order memorial trees or send flowers to the family in memory of James Benjamin Whittington, please visit our flower store.