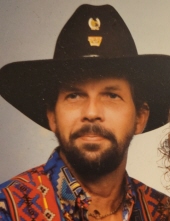 Jackie enlisted in the US Army in January 1974 in Kansas City, MO and served until January of 1977. While in the Army he received the National Defense Service Medal (Marksman) and a Purple Heart.

Most people knew Jack as “Wolfman” which he was given while he was in the Army. He had many loves and hobbies during his life including, playing darts, race cars, watching movies, and loved to BBQ. He and Tina were on many dart leagues over the years and played in tournaments winning trophies and cash. He and Tina traveled many times to Canada over the years where her family lives to visit and many times to Florida. He loved to dance and was in competitions. Once he won 50.00 in a Jitterbug competition. He enjoyed his food and fried chicken was his favorite. He also loved his daughter Lynn’s homemade spaghetti. He was a lucky man when it came to scratch off lottery tickets and always won.
He loved his wife, children, grandchildren and great grandchild, they made him happy in life. His dart families were a huge part of his life and really enjoyed the time they spent together.

He is preceded in death by his parents, Lora and Rosa Parsons.

Funeral service will begin at 4:00 pm
To order memorial trees or send flowers to the family in memory of Jackie Lewis Parsons, please visit our flower store.