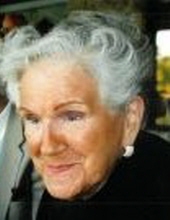 Hilda Meyers passed away on Monday, April 18, 2022. She was 103 years old. Born Hilda Elizabeth Willis on April 16, 1919, in New Castle, Indiana, to parents Betty McMillen Willis and George Willis.
Hilda married William A. Meyers on October 14,1944, and he preceded her in death after 33 years of marriage. She worked at Naval Avionics in Indianapolis. She was a member of St. Marks Methodist Church in Carmel. Hilda was a past member of Eastern Star. A daughter Toni Meyers Dyson and son Michael Meyers of Indianapolis preceded Hilda in death.
Hilda is survived by her daughter Tracy Meyers Butler, grandchildren Grant Meyers, Kyle Leser, Todd Butler and Lindsey Butler, three great grandchildren and several nieces and nephews.

Funeral services will be held Friday, April 22,at St. Marks Methodist Church in Carmel. Calling will be from 11 A.M. to 1 P.M with the service following the calling at 1 P.M. Immediately following the service, burial will be at Oaklawn Memorial Gardens in Fishers, Indiana.

To order memorial trees or send flowers to the family in memory of Hilda Elizabeth Meyers, please visit our flower store.