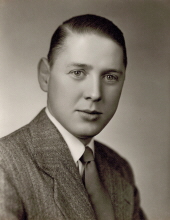 Henry Spalding Klosky, born in the District of Columbia in 1925, was the son of Kathryn Klosky (nee Gloninger) and Simon Klosky, a chemist for the U.S. Department of the Interior.

Henry grew up in New Jersey and joined the Navy in January 1943 during World War II. He studied at Notre Dame and Cornell, and served on a Landing Ship, Tank (LST) in the Pacific Theatre. Henry married Patricia Louise McDonough in 1951, and they celebrated over 70 years of marriage.

After his service in the Navy, Henry received his undergraduate degree from Rutgers University and then continued his studies at University of Maryland completing his Master of Science in Agronomy. He served in the Naval Reserve until September of 1955.

Henry started his career in agriculture with Baugh & Sons Company in Baltimore. Following corporate consolidations, he joined W.R. Grace. In 1968 he was transferred to Memphis, Tennessee, and the Klosky family followed.

In Memphis, Henry was president of the board of St. Agnes Academy, and his family became members of St. Louis Catholic Church, where Henry served as a Eucharistic Minister. Later, he became a member of the Dominican Order of Preachers Association.

Together, Henry and Pat served in visitation and prison ministry for decades. After retirement, they attended daily mass. An avid gardener and bridge player, Henry also volunteered for numerous Catholic organizations.

He is survived by his wife Patricia, his six children—Patricia (Kenneth), Kathryn, Rebecca (Peter), Michelle, Henry (Vickie) and James (Jill)—six grandchildren and eight great-grandchildren. Henry will be sorely missed by his family and by those he touched through friendship, service, and charity.

A funeral mass will be held on September 25, 2021 at St. Anthony’s Church in Emmitsburg, MD.
To order memorial trees or send flowers to the family in memory of Henry Spalding Klosky, please visit our flower store.