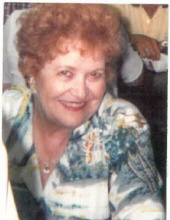 After 98 years of a spirit-filled life, Greta Henson passed away peacefully at Community Hospital North in Indianapolis on Saturday, February 19, 2022. She leaves behind her two daughters, Sherry and Diane, who she adored and a younger brother, Norman Snook, with whom she used to ride to school on a pony.

Greta was a child of the Depression and a member of the Greatest
Generation who grew up in Des Moines, Iowa in a very loving family. What they lacked in material possessions they made up in kindness, love and caring for one another. She graduated from North High School and during her senior year was in charge of all assembly programs. As a talented singer her favorite accompanist at North High was Louie Weertz (later known as Roger Williams). Greta was a lifelong Iowa Hawkeye fan (much to the chagrin of her youngest daughter who was an Iowa State Cyclone).

During World War II, Greta worked at the Ankeny Ordnance plant. Starting out as a “Rosie the Riveter,” in less than one week she was promoted to executive assistant to the plant foreman. There she met Hazel Falk who became her forever best friend. Before there was Lucy and Ethel, there was Greta and Hazel!

On a blind date set up by Hazel, Greta met her future lifelong partner and love of her life, Alton Henson. As a US Navy officer who had spent the past year patrolling the Atlantic searching for U-boats, he was participating in advanced flight training in Ottumwa, Iowa and like many of the World War II young men were known to do, headed to Des Moines on the weekends to meet some Iowa girls! When he arrived for the date he got out of the taxi and brought several gifts and said to Greta “Just call me TEX,” and that is how a girl from Iowa married a Navy pilot from Texas. Greta loved telling the story about him being tall and it was a good thing because
Greta always said she would only go out with a TALL man.

Thus, their journey began as a Navy family living all around the country: Jacksonville, Long Beach, New Orleans, San Diego, Corpus Christi,
Seattle, Coronado, Imperial Beach, Annapolis, Monterey, Duluth, Ames (the Navy sent Al to Ames for his M.S. in Nuclear Engineering so he was a Cyclone too), Norfolk, Albuquerque, and Washington, D.C. Greta loved people and never met a stranger, she had friends in every port and every squadron who she kept in touch with throughout the years. She wrote lovely letters to people so many of whom have commented how much her letters touched them.

Greta experienced so much history. For example, she and Al were present on the Mall when President John F. Kennedy gave his immortal inaugural address. After they moved to Indianapolis for Al’s second career as an
engineer for General Motors, she worked as a paid staffer for Senator Robert F. Kennedy’s presidential campaign and was there when Bobby won the Indiana democratic primary. She had a career for more than 20 years in the interior design business, working for two of Indiana’s top
designers, Bob Arehart and Janie Jacobs.

She volunteered for ten years at the KIND Alternative School in Lawrence Township where her daughter, Sherry, was the principal. The students
addressed her as “Miss Greta” and would often whisper to her to see if she could arrange an appointment with the principal. They loved confiding in her.

She was so proud of her daughter, Diane, when she was sworn in as a Justice on the Texas Court of Appeals in Austin, Texas. That was a very special day!

A wonderful cook and hostess, she loved her home, garden, feeding the birds and traveling with Al and later with her daughters. More so, she loved her family and friends with all her heart. She considered Janie
Jacobs a surrogate daughter and has been close to Janie and her family (Sam, Ryan and Danny) for nearly half a century. Other surrogate
daughters were Linda Hicks, Cynda Powell Glor, and Rene Stewart. She had many friends including Lupe Omega and Lonnie Hough who helped make it possible for her to keep her beautiful home in perfect condition and with the loving assistance and care-giving of her daughter Sherry, she was able to stay in her home until her death. There is no doubt that Al and many others will be welcoming her to Heaven with open arms and a vodka martini. A grand, classy lady with a heart of gold and a will of steel. A life well lived.

Services will be in Des Moines, Iowa where Greta will be laid to rest at Pine Hill Cemetery.

Memorial contributions in Greta’s memory may be made to the Defenders of Wildlife, 1130 17th Street NW, Washington DC 20036.

To order memorial trees or send flowers to the family in memory of Greta Henrietta Henson, please visit our flower store.