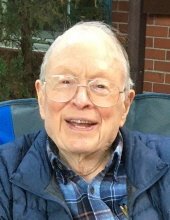 George Uriah Dougherty, a loving husband, father, grandfather, and computer services pioneer, passed away on Veterans Day, November 11, 2021, at the age of 90. George served in the United States Army from 1951 to 1954. He was on active duty in the Korean War from 1951 to 1952.

Born in Indianapolis, Indiana, from the union of Emory Arthur and Fredericka Keen Dougherty, George came into the world on June 10, 1931, with his twin brother, Arthur. Their younger brother, Phillip, followed not long after. George went on to study at Indiana University, where he met Wendy, with whom he would exchange vows and share 62 married years.

George is remembered as a kind soul who touched those he met with his infectious smile and his continual effort to amuse. He was known for making clever play-on-words jokes and sharing insights from the latest book he was reading (most recently, How I Learned to Understand the World by Hans Rosling). He also enjoyed fine wine and discussing politics in mixed company.

When George was eight years old, he and his twin brother worked at the Dougherty family bakery in Greenfield, Indiana, where he earned 10 cents per hour, enough for one movie and a box of popcorn each week. In their late teens, George and his brother stepped in to run the bakery for their mother following the early death of their father. George believed in delivering a quality product. Consequently, he shifted baking from early evening to the overnight hours to get the freshest goods in customers' hands.

Early in his professional career, George worked as a Systems Analyst at several large companies, including American Fletcher National Bank. Later, he saw a better, faster way to deliver computer services and formed Information Dynamics, Inc., one of Indiana’s first independent data processing companies. His strong work ethic, empathy for people, and desire to deliver a quality product are values that live on at the company today. It has since rebranded as SinglePoint and now provides cloud-based HR/Payroll services to employers worldwide.

In his younger years, George loved to play the clarinet and saxophone. His 14-piece band played “big band” music at special events. He enjoyed being with his friends and family at his cabin on the beautiful Desbarats Lake in Ontario, Canada.

In retirement, George spent much time playing word games with Wendy, reading, keeping up with world events, and celebrating special occasions with his family. He lived in his home of 45 years in the Butler Tarkington neighborhood through his 90th birthday. George never lost his deep appreciation for nature and, right up until the end, watched and pointed out to caregivers fall foliage and other beautiful scenery he saw on TV.

George is preceded in death by his parents, his twin brother, Arthur B. Dougherty, and his younger brother, Phillip Keen Dougherty. A memorial service to honor George is being planned, with details to be announced here: www.indianafuneralcare.com
To order memorial trees or send flowers to the family in memory of George Dougherty, please visit our flower store.