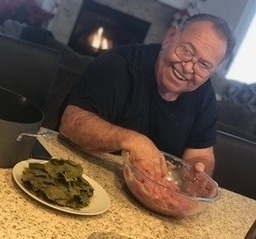 George was born on October 30, 1935, to Anise and Elizabeth Corey in Indianapolis, Indiana. A Shortridge High School graduate, George went on to marry Marilyn Sue Hightower in 1958. George and Marilyn had three children, George, Lora and Pamela. George was a devout member of St. George Orthodox Church where he served on the Board of Trustees and the Order of Saint Ignatius.

In 1983, George achieved his lifelong dream by becoming a restaurant extraordinaire when he opened his own restaurant, George’s Place Steaks and Seafood, which he owned and operated for the next 17 years with his children. His restaurant was named Best Steak House by Indianapolis Monthly Magazine for several years. After the passing of Marilyn in 1987, George reconnected with a fellow Shortridge graduate and married Judith Schroeder in 1992. When George wasn’t at the restaurant or at church, he was hosting his famous Sunday family get togethers around his pool in Indianapolis.

George later retired and relocated to Bonita Springs, Florida, where he enjoyed fishing, his boat, and making Syrian meals for his family. While retired, George became a founding member of the St. Paul’s Orthodox Church in Naples, Florida.

To order memorial trees or send flowers to the family in memory of George A. Corey, please visit our flower store.