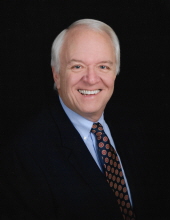 A celebration of life will be held at 2:00 p.m. on Friday, July 16 2021 at Second Presbyterian Church, 7700 North Meridian Street, Indianapolis, Indiana, 46260. The service can be livestreamed at https://secondchurch.org/funeral.

Fred Parker, 74, of Indianapolis, IN passed away on July 9, 2021 after a long battle with Pulmonary Fibrosis and Pulmonary Hypertension.

Fred was born in Milwaukee, WI on March 18, 1947 to parents James P. and Anna Margaret Parker. Fred graduated from Lincoln High School in Cambridge City, IN and went on to attend DePauw University where he met the love of his life, Barbara.

During his career, Fred worked as an executive in the steel manufacturing industry always caring deeply about his employees and helping those who worked with him find their true potentials. His work took the family to live in England and then to California, and Illinois, before retiring and moving back home to Indianapolis. During the globe-trotting portion of his career, many wonderful family memories were made and many new friends gained.

Throughout his life, Fred expressed himself musically, playing many instruments (especially loving the double bass), singing in barbershop quartets and choruses early in life, and later, singing his faith through his deep, strong bass voice in church choir. All who knew him speak of his large presence, his big laugh, and broad genuine smile. Fred was a father figure to many, but none more so than his children and grandchildren.

Fred served as a deacon and elder, and was an active member of Second Presbyterian Church and the Sanctuary Choir. He adored being on the water, boating or on the beach, and traveling with his wife Barb and their friends.

Fred is survived by his wife, the Reverend Barbara Parker, their daughter Wendy Parker and her fiancé Jake Robinson, daughter and son in-law Katie and Chip Maxwell, his three granddaughters Celia Parker-Fetterman, and Parker and Maggie Maxwell, and sister Joan Harms. He was preceded in death by Barb and Fred’s oldest daughter Meghan Parker who passed away in the fall of 1990.

In lieu of flowers, donations can be made to the Second Presbyterian Church Music and Fine Arts Outreach Fund.
To order memorial trees or send flowers to the family in memory of Fredrick William Parker II, please visit our flower store.