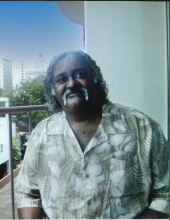 Fred Haskell Moore, born to the late Fred Powell Moore and late Virginia Brinkley on September 5, 1953, Indianapolis Indiana.
August 16, 1975, he was wed in Holy Matrimony to the late Marcia Ann Moore at College Avenue Baptist Church.
Fred, from a young age was very bright, with an inquisitive spirit. A showman and resonance man, Fred did many plays, musicals, and talent shows from adolescence to his teenage years, including winning state in singing. He would go and graduate from Broad Ripple High School in 1971. Through his life’s pursuit as a musician, he received a full ride scholarship to Indiana State University for his voice. He would forever be a genuine lover and student of music; writing, playing, and singing till his final days. Believing that Christ was his savior, Fred was baptized at College Avenue Baptist Church and then again at Bethel Tabernacle by the late Elder Clark Harwell. Later, he would attend House of Prayer Community Church under Pastor Frederick Hyche.
Fred’s employment included Herff Jones, a decade at Peerless Pump Company, and later a Walmart custodian until retiring in the mid-2010s. Even with gainful employment, Fred considered himself a true entrepreneur selling wares including clothing, handbags, and cologne/perfume. A lifelong dream was achieved when he released his solo album, Fred Moore Back to The Old School in the year 2000. Using his major musical influences including Marvin Gaye and Curtis Mayfield, Fred was able to produce an RnB album, throwing listeners back in time with a soulful sound.

Fred Haskell Moore, age 68, passed on Tuesday, November 16, 2021 at 8:42 p.m. to go home with the Lord, while as a patient at Ascension St. Vincent Hospital. He was proceeded in death by his father, Fred Powell Moore; mother, Virginia Brinkley; stepfather, Mitch Brinkley; two brothers; Charlie Miller Brinkley and Thomas Brinkley; and his partner; mother of his three sons; Marcia Ann Moore.
He leaves an impact to those who knew and loved him including his loving daughter Angel O’Banion; devoted sons, Clarence Moore (Nicole), Terrence Moore (Stefanie), and Eric Moore; two sisters, Opal Prevot (Jonathan), and Freda Brinkley; one brother, Terry Moore; plus the many nephews, nieces, cousins, friends, saints, relatives and acquaintances.
To order memorial trees or send flowers to the family in memory of Fred Haskell Moore, please visit our flower store.