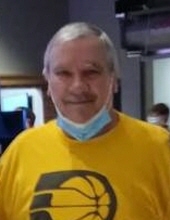 Frank Larry Nanny was born on Monday, February 20, 1950, in Indianapolis, Indiana to Roscoe and Flora Nanny. He graduated from Harry E. Wood High School in 1969. He started his career as a roofer and later worked at Community Hospital. He also worked for Miller beer distribution company. He ended his career as a cook at the New Bethel Ordinary.

Frank was best known for his love of volleyball, telling, and playing jokes, telling stories, antiquing and yard sales but most of all he loved all his family.

Funeral service will begin at 7:00 PM

To order memorial trees or send flowers to the family in memory of Frank Larry Nanny, please visit our flower store.