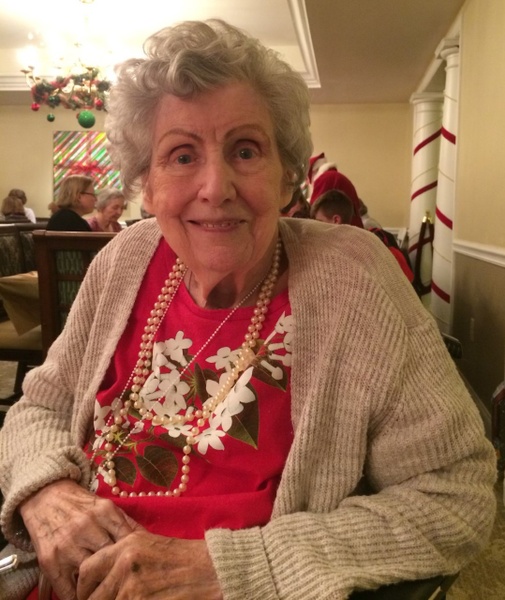 Eunice Mary Toroni went home to be with her Lord and Savior at Sunrise Senior Living, Carmel, IN on Thursday 11 August 2022 at 9:05 pm. She was 95 years old. Born in Adelaide, South Australia 29 September 1926 to William Davy and Claudia (nee Langsford) Davy. Her husband John Toroni was serving as Chaplain in US Army during WWII and served in New Guinea being based out of Sydney, N.S.W., Australia. John met Eunice at a church near Sydney and they were married 13 November 1943, she became what is called a WWII war bride. She had 3 sisters and 3 brothers all predeceased all in Australia.

During the war she went on a troop transport ship to San Francisco then by train across the USA to Berwyn, PA where she lived with John Toroni’s Italian family. What a culture shock. John came back after the war and on the GI Bill went to a Bible School/Seminary in for 4 years in Philadelphia. John was also a professional violinist who in the 1930’s was a winner of Major Bowes Amateur Hour and toured the country playing the violin. While on tour he was at a meeting where the gospel was presented, the good news of Jesus dying on the cross for our sins. John 3:16. He accepted Jesus as his Lord and Savior and his life was changed. When WWII began John became a chaplain’s assistant in the Army.

Their only child Ronald was born in 1947.

Eunice worked for General Motors, Pontiac, MI from 1966 to 1989 and became an Executive Secretary and retired in 1989.

Moved to Indianapolis IN in 1995. John Toroni died in August 1996 and interred at Marion National Cemetery, Marion, IN.

Eunice was a lady of many talents. With her husband from 1949 to 1993 they presented Christian concerts with Eunice singing and accompanying on the piano while John played the violin. John would then tell a story (Bible or Secular story with a Christian application) while adding music and sounds on the violin. The violin was named Tony the talking violin. She was a professional soloist in different churches. She made and decorated many of her clothes painting floral designs on them, she knit and crocheted, did Christian and secular readings, was a woman’s Bible study teacher. She enjoyed playing tennis since the 1960’s. When she moved to Indianapolis she played at Indianapolis Racquet Club, where she also worked part time. She taught her son and two grandsons how to play table tennis. She loved her native Australian flowers and wildlife, her flower garden, jewelry, and gemstones- she studied Geology and gave lectures on Geology. Like her father she loved clocks and had over 20 clocks in the house with two Grandfather clocks. She always had dogs in our family.

She was always friendly and kind to all, very hospitable, always said please and thank you.

To order memorial trees or send flowers to the family in memory of Eunice Mary Toroni, please visit our flower store.