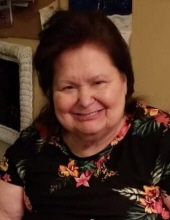 She was born on Wednesday, January 11, 1950 to the late Charles and Hazel (Robertson) Martindale in Vincennes, Indiana.

Etta Mae Christine Dyer was a wife, mother, daughter, grandmother, great grandmother, sister, aunt, and breast cancer survivor in her lifetime. She grew up in Edwardsport, Indiana and eventually moved to Indianapolis where she graduated from Southport High School.

Etta spent many years working for RCA, but her true passion was entertaining as a professional clown. Humor was a pillar in her personality, felt by every person who met her.

She is preceded in death by her parents, Charles and Hazel Martindale; and her son Landon Dyer.

Her daughter Hope was her best friend. She was enthusiastic and filled with life. Etta knew no stranger. She loved to conversate and help those around her. Some of Etta’s favorite things were Elvis Presley, old western movies, Mickey Mouse, Betty Boop, baking, thrift stores, country music, and being with her grandchildren.

She was a strong, determined, and fiercely independent woman. No project was too big, and no idea was too scary. She will be missed every single day.