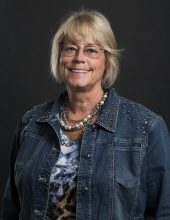 Ellen Elizabeth Tucker, 67, of Indianapolis, IN passed away at home surrounded by family on October 28, 2021. Elizabeth was born Cincinnati, Ohio to the late William Thomas Tucker and Edith Ellen (McGowan) Tucker. Elizabeth was raised in Galion Ohio before she moved to Indiana and graduated from Southport High school in 1972. She served in the U.S. Army for a brief time, joining in 1974.

Elizabeth worked at FedEx as a courier for nearly 30 years, retiring in 2018.

Elizabeth enjoyed arts and crafts with her grandkids, sisters and many friends, and traveling to the Gulf of Mexico and Dale Hollow Lake to soak up the rays from the sun. Making memories with her family was a priority. She was an avid reader. Peaceful walks on trails and other pathways was always a relaxing time to Elizabeth. Another one of her passions was to sit on her back patio watching birds and enjoying her bountiful flowers. She loved her gardens and worked diligently to perfect them over the years. Elizabeth participated in a number of community activities and was especially fond of the Wreaths Across America program, decorating the graves of soldiers buried in Indianapolis. She also delivered holiday meals to those in need for Thanksgiving and Christmas.

Friends and family members always knew that if they needed advice or instructions to complete a task that they could reach out to Elizabeth.. They were aware of the honest truth of advice that she would give. In this way, she touched many lives.

Elizabeth will be remembered as a significant other, mother, grandma and friend to all of those that she leaves behind. She will be greatly missed. Elizabeth is preceded in death by both her parents along with her half brother Bill Tucker III, her half sister Laurie Love and her full brother Bob Tucker. She is survived by her significant other, Dave Hanson, daughter, Erin Tucker-Stone, sisters, Meri Reinhold and Suzy Saverline, brothers, Bill IV Tucker, Jon Tucker and David Tucker along with her two grandkids Jayda and Dominic.

Elizabeth's life celebration and memorial will be held on Friday, November 5, 2021 from 5:00-7:00 for visitation with memorial services including military tribute from 7:00-8:00pm at the Indiana Funeral Care , 8151 Allisonville Road Indianapolis, IN 46250 Memorial Contributions can be made to Tina's Wish, a charitable foundation that raises money for scientific research for early detection and prevention of ovarian cancer. Donations can be made at www.tinaswish.org. Note Ellen Elizabeth Tucker on the donation form. Live streaming of service can be found online at Indiana Funeral Care website.
To order memorial trees or send flowers to the family in memory of Ellen Elizabeth Tucker, please visit our flower store.