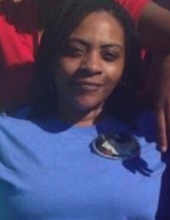 Elise attended Arsenal Tech High School and worked at IUPUI and she loved her work family.

Elise later in life gave birth to her one and only son Robert Paul Richardson who was dear to her heart. Elise was a lovely mother, a great grandmother, sister, aunt and great friend, she was loved by
many. Elise was always humble with a great spirit, she loved watching her favorite shows and loved reading books. If you knew Elise then you know her love for CHEESE!! At every event she was the life of the party.

Elise leaves to cherish her only son, Robert Richardson, and her bonus daughter Quiana Tuner, her grandson Robert Richardson as she called “Dranchun", Dannie Turner, Donta Turner and Deresa Turner and host of bonus grandchildren;
brother Billy Richardson: and a host of nieces and nephews.
To order memorial trees or send flowers to the family in memory of Elise Richardson, please visit our flower store.