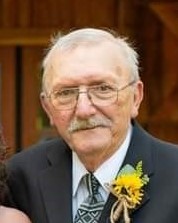 Edward "Ed" Bichaukas Jr., age 81, passed away December 14th, 2022. Ed was born May 26th, 1941 to the late Edward L Bichaukas Sr., and Katherine R. Kershefski, in Wilkes Barre, PA. He moved to Indiana in 1980 when he retired from the US Army. He had a 21 year career in the Army followed by a second career at the U.S. Postal Service in Indianapolis.

After retirement from the Postal Service Ed became an active member of American Legion Post 252, in Greenwood, IN., where he served as Adjutant for the last 12 years. He was also a member of the VFW Post 5864 in Greenwood, IN., a supporter of the Disabled Veterans National foundation and the Boys and Girls Club of Indianapolis.

Ed was a natural leader and was loved and respected by all who knew him. He was a dedicated fisherman and a huge Notre Dame Football fan.

To order memorial trees or send flowers to the family in memory of Edward Bichaukas, please visit our flower store.