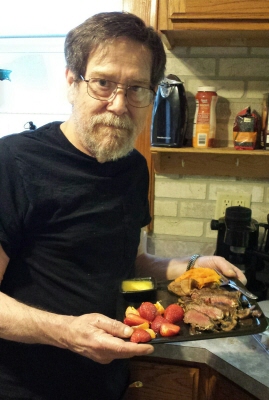 Duane Gordon Fischer II of Indianapolis, Indiana passed January 19, 2022 with his wife by his side.

He had a life-long love of learning; he was a sharer of knowledge. Many hours were spent in coffee houses, on couches, front porches, and during car rides talking about life and all it encompasses, good and bad, as people were Duane's greatest passion. His friends will share how he could be counted on to listen without judgment. "He helped me get through the tough times" is repeated by those who loved him, and he was described as a hero, confidant, and teacher. He enjoyed reading, cooking, and creating music--singing and playing guitar. He had a fondness for old cars and would tinker with them as well as computers.

Duane had many titles throughout his life: QMHP, chemical plant engineer, postage meter repairman, HVAC tech at Fort Benjamin Harrison, psych tech and many others. He was the most proud of the help he was able to give as a case manager and therapy group leader for those suffering from mental health challenges and addiction.

Duane enlisted at 17 in the US Army. He completed 2 tours in Vietnam serving as a squad leader and tunnel rat. Assigned to the 11th Armored Cavalry Regiment ("Blackhorse Regiment"), he served as a combat engineer and was discharged at the rank of Sergeant. He attended Indianapolis Public Schools, completed his GED in the Army, and earned his Bachelor's of Psychology at Martin University, Indianapolis.


He will be greatly missed.
To order memorial trees or send flowers to the family in memory of Duane G. Fischer, please visit our flower store.