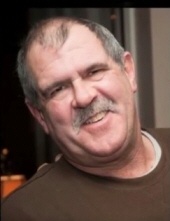 Douglas Allen Cotton passed away on December 3, 2021, at the age of 67, surrounded by loved ones. His battle with serious medical issues in recent years showed his strength and courage in facing life challenges with a smile. Despite the pain, Doug fought hard and stayed strong until the end.

Doug was a hard worker and took great pride in his work. He started out as a construction laborer and worked his way to owning his own companies, Cotton Construction/Cambridge Custom Homes. Doug had built many custom homes in Central Indiana.

Doug was a passionate man that loved his family and his pets. Although Doug retired from building homes, he continued to remodel houses. When he wasn’t working, Doug was a very talented carpenter and could usually be found in his workshop building cabinets.

Doug will be honored in a private celebration of life. In lieu of flowers, donations can be made in Doug’s honor to Friends of Indianapolis Animal Care & Control Foundation, Inc.
To order memorial trees or send flowers to the family in memory of Douglas Allen Cotton, please visit our flower store.