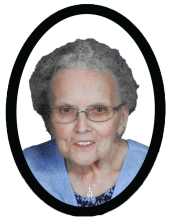 Dorothy "Joy" Walters, 88, passed away September 4, 2021, while surrounded by her husband, children, and sister.

Joy was born August 30, 1933, in Sullivan County, IN to Jesse and Zelda Fox. Joy had two brothers (Charles and Raymond Fox) and two sisters (Thelma Allen and Jessie Page).

Along with being involved with the Howe Hornet marching band raising money by working at the Hoosier Dome, Joy was an active team Mom for all her kids' sports teams. Joy retired in 1985 from Community Hospital East after 22 years of service as the overnight registrar.

Joy was a member of Christian Park Reformed Church for several years prior to joining Good Shepherd United Methodist Church, which she attended until her death.

Joy was proceeded in death by her daughter Diana, her parents, both brothers and sister Thelma.

In leu of flowers, the family is asking for donations to be sent to the Alzheimer's Association.

Indianapolis, IN 46229
To order memorial trees or send flowers to the family in memory of Dorothy Joy Walters, please visit our flower store.