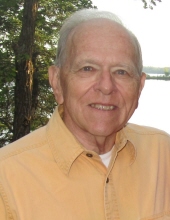 Donald Richardson passed away on January 28, 2022, in his sleep, at home in Indianapolis. He was 89-1/2 years old. Don was a career English professor, a published author, a devoted family man, a duplicate bridge life master, and a resolute Vikings fan, with a quick wit, always a kind word, and a deep and abiding faith. He is survived by his wife of 67 years, Verla, by three sons, nine grandchildren and two great-grandchildren, by three siblings and a wealth of extended family members, by a long lifetime of close friends, and by generations of impressionable students who were inspired by his eloquence and example.

Don was born in a farmhouse near Bristol, Vermont on July 9, 1932, the second of seven children. His early childhood was idyllic, playing with his brothers in the Green Mountains. When Don was 9, the family relocated to a different Bristol, in Connecticut, where he demonstrated exceptional aptitude academically and won awards in science, oratory and writing. By the time he graduated from high school in 1950, he decided to become a minister with the Baptist General Conference, and went on to attend the Baptist-affiliated Bethel College and Seminary in St. Paul, Minnesota, where he received his undergraduate degree in Literature in 1954 and a Divinity degree in 1958. During that time, he composed a series of sermons in the form of dramatic monologues, firsthand narratives from the perspective of New Testament characters, which he developed a reputation for delivering with dramatic intensity.

While at Bethel, he met the love of his life, Verla Nielson, at a church event. They were married at her childhood church in Montrose, South Dakota, on September 17, 1954, and continued to live in St. Paul, where they were joined by three boys: Scott in 1956, Brad in 1959 and Todd in 1961. Don became an ordained Baptist minister in 1958, but by then was already attending graduate school at the University of Minnesota. He served as an interim minister in Glenwood, Minnesota for two years, and later wrote hundreds of short stories and religious articles for Harvest Press. In the same period, he began teaching speech as a grad student and in 1957 he received his masters degree in Speech & Theatre Arts with an emphasis on classical rhetoric. He received his PhD from the University of Minnesota in 1968, again in Speech & Theatre Arts with an emphasis on classical rhetoric.

Don began his career as a college professor at the University of Minnesota, and after one year at the University of Maine and three years at Northwestern College in Minneapolis, he chaired the English Department at Sioux Falls College from 1966 to 1969. While in Sioux Falls, the family home served as headquarters for a collection of students with impressionable minds, whom Don influenced to support moral causes and to question authority. Many of them remained close friends for the rest of his life.

In 1969, Don joined the faculty at the University of Evansville in Evansville, Indiana, where he taught until he retired in 1999. During that three decades, he distinguished himself in many ways. He delivered a controversial speech protesting the Vietnam War that made the papers. He was Chair of the University of Evansville Senate in 1975-76. He was chosen as the first speaker in the University’s “Last Lecture” series in 1979. He received the Outstanding Scholar Award in 1985 and the Outstanding Teacher of the Year Award in 1990. He was English Department Chair from 1989 to 1995. In addition to papers, articles, speeches and conference presentations, Don was the author of four published books on themes of Greek mythology and religious experience: Great Zeus and All His Children in 1984 (with multiple derivatives later), Eyewitnesses in 1988, Iphigenia at Aulis in 1988, Stories of the Greeks and Romans in 2000, and The Twin post-retirement in 2013.

In addition to scholarly achievements, Don nurtured a passion for creative writing and theatrical productions. He acted in a number of plays, from college into the 1980s. In 1968, he wrote and directed Liz, an antiwar update to Aristophanes’ Lysistrata that was presented at Sioux Falls College and in Minneapolis. He wrote and directed a half dozen musical parody shows at the University of Evansville. He performed as Stephen Douglas in recreations of the Lincoln-Douglas debates. With the adaptation of Iphigenia at Aulis that he co-wrote with his son Scott, he reimagined an ancient Greek tragedy as a rock musical. He also continued to deliver sermons as a guest minister, often performing his dramatic monologues.

Don pursued his diverse interests with energy and resolve. He and Verla visited all fifty states. In the summer of 1972, he and Scott spent six weeks exploring Greece. The next year, the family spent six months at Harlaxton Manor in Grantham, England, the University of Evansville’s study abroad program, followed by a summer in Oslo, Norway. Don and Verla returned to Harlaxton in 1999. In all, the couple visited 17 European countries. He was also an avid competitor at duplicate bridge, which he played at club events and tournaments with Scott and other partners, achieving the status of Life Master in 1987 and ending up as a Silver Life Master. He even wrote a mystery novel that revolved around a duplicate bridge player. Don also enjoyed games and puzzles, literature and novels, golf, fishing, gardening, theatre and cinema, and football.

After retiring in 1999, Don continued to travel with Verla, play bridge, write, and most of all to spend time with their blossoming family. He finally achieved his vision of agrarian paradise when he and Verla bought a retirement home with acreage in a rural setting in central Minnesota, where he spent twelve satisfying years working the garden, taming the woods, and hosting a parade of visitors and family events. In 2015, they returned to Indiana, moving in with son Todd, his wife Surisa and family in Indianapolis. That last chapter in his life was peaceful and fulfilling, as he enjoyed another home with acreage and woods, delicious food, and an active family life with growing children and many visitors.