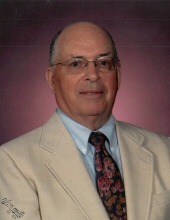 Donald L. Taylor, age 90, of Lafayette, died at home surrounded by loved ones on Saturday, September 25, 2021.
Born on January 10, 1931 in Lafayette to Alta (Wagoner) Taylor and David R. Taylor. He attended Klondike High School and graduated in 1949. He then enrolled into the School of Education at Purdue University. Don graduated from Purdue in 1953 with a BS degree in Education. During this time, Don met and married Betty Richardson of Lafayette. They were married for 68 years.
Upon graduation from Purdue, Don served in the U.S. Army as a PFC during the Korean War. When his service was complete, he returned to Lafayette and began his teaching career as a 5th Grade teacher in Flora, IN. Two years later and two children later, he accepted an offer to teach and coach at Edgelea Elementary School in Lafayette. For 15 years he enjoyed teaching and reaching many students. Back to Purdue he went and received a Master's Degree in Administration. For many years to follow, he gladly served the Lafayette School Corporation at Edgelea Elementary, Vinton Elementary, and Miami Elementary as an administrator. Don remained as a Principal until his retirement in1993.
Don and Betty belonged to Immanuel United Church of Christ for 30+years and also to the Community Reformed Church in later years. He was also a member of the American Legion Post #11, was a life member of the Elks Country Club, was a long time member of the John Purdue Club, was past president of Phi Delta Kappa, and was also a past president of the Jefferson High School Booster Club.
In his spare time, you could find Don on the golf course, traveling to Florida, woodworking with grandchildren in his shop, or tutoring students. In 1993, he was presented a membership to the Sagamore of the Wabash Council for his outstanding leadership and citizenship.
Surviving are his Wife: Betty Taylor, Children: Lance Taylor (Kim) of Indianapolis, Kathy Sagorsky (Joe) of Goodyear, AZ, and David Taylor (Ann) of Indianapolis, Grandchildren: Emily Taylor (Emily Larimer), Ben Taylor (Amber Taylor), Kurt Sagorsky (Sarah Sagorsky), Nick Sagorsky (Alyssa Sagorsky), Lauren Taylor, Alex Taylor, and Max Taylor, and Great Grandchildren Finn Taylor, Graham Sagorsky, Henry Sagorsky, Cai Larimer-Taylor, and Charlotte Larimer-Taylor. Don was preceded in death by his parents and his brother Raymond H. Taylor.
A Celebration of Life with military honors will be held on Friday, October 1 at 2:00 at Community Reformed Church, 2501 South 18th St. Lafayette, IN. A link to the livestream of the service will be posted on the church's website at www.crclaf.org
A reception will be held before the service from 12:30 -2:00. If you plan to attend, masks are encouraged. Arrangements are being made with Indiana Funeral Care and Crematory in Indianapolis. Final interment will be in Tippecanoe Memorial Gardens. In lieu of flowers, donations may be made to the American Legion Post #11 in Don's name.
To order memorial trees or send flowers to the family in memory of Donald L. Taylor, please visit our flower store.