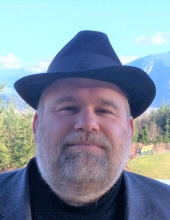 David Wayne Grigsby, 55, moved onto the next channel on October 29th, 2021, after living his life to the fullest in the great pursuit of love, happiness, and knowledge. Born November 29th, 1965, in Indianapolis to the late Wayne and Jacqueline (Barnhill) Grigsby. He was the brother to his younger sister Andrea “Andi” Boden, who all of processed him in death.

David was an active youngster who was known to ride his bike all over Indianapolis from dawn to dusk with his best friend in search of fun. He graduated from Thomas Carr Howe High School as a part of the class of 1984, where he was an athlete, artist and a member of the National Honor Society. As a freshman, he won the 500 Festival of the Arts’ Grand Prize for his pencil drawing before he turned his focus towards his professional career.

David married the love of his life, his beloved Anna (Haboush) Grigsby in May of 1985. For 36 years, every time he took his ring off or put it back on, he kissed it thinking of her. His legacy lives on with Anna, their oldest son Zachary and his partner Lexi, as well as their youngest son Matthew and his partner Anis.

David was a teacher, author, artist, software programmer, draftsman and entrepreneur who looked to leverage all his abilities throughout his career. His first job was mowing grass and doing odd jobs for the World War II veterans that lived around his neighborhood. His senior year of high school he joined Jarrett Engineering where he was able to use his passion for art with CAD to make industrial drawings. He then founded DNA Software Company, Inc. with Anna where they provided coding, training, and systems integrations. He continued to develop his skills at numerous companies before setting off on his adventure West to show he had what it took to run with the big boys at Microsoft at the turn of the century.

While he was out in Washington state, he started Grigsby Consulting LLC, which he continued to operate until the end. After moving back home to Indiana to be closer to family, David and Anna opened Cafe del Drago, which led to David serving as CTO for the City of Indianapolis. After he left that position, David sought out work with multiple startups, leading him to develop the DocuSign and Salesforce app, which he later joined DocuSign as a member of their Professional Services team where he worked as their “fixer”. Through his professional career he made many steps by impressions and lifelong friends at each stop.

David was a Master Mason with dual membership to Unity Lodge #198 of North Bend, WA and New Palestine Lodge #404 where he was a Past Worshipful Master. He also belonged to the Greenfield Knights Templar Commandery, the Greenfield York Rite, the Indianapolis Scottish Rite, and the Shelbyville Order of the Eastern Star.

David was an avid outdoorsman who enjoyed hiking, camping, and gold panning. He was able to hike portions of the Pacific Crest Trail, both solo and with friends and family. He was also a gamer who loved to share with others. He volunteered and organized a chess club at an elementary school in Woodinville, WA to pass along his passion for the game to his sons and their classmates.

David was an explorer who visited all 48 continental states and sought experiences abroad in Great Britain, the Czech Republic, and Saudi Arabia to name a few. His passion for space is where we believe the start of his next adventure is, along with his wife, Anna, he made the trip down to Florida to the see STS 135 (the last shuttle mission) and he loved following SpaceX, particularly Inspiration 4 most recently. Wherever his next destination is, we know he has his trademark fedora with him.

David’s service will be held at Indiana Funeral Care at 8151 N Allisonville Rd, Indianapolis, IN from 1-3PM. He wished to not be shown and to be cremated, which the family is honoring.
To order memorial trees or send flowers to the family in memory of David Grigsby, please visit our flower store.